Mass Effect: Paragon Lost
Brood is a member of a squad of Blood Pack mercenaries who attack the human colony of Fehl Prime in 2183 and is Archuk's second-in-command.[2][3] He has the bloodlust typical of his species as well as a code of ethics that compels him to honor his debts in a warrior's way.

Brood is present during the Blood Pack's attack on the Fehl Prime colony in 2183. He takes out the colony's kinetic barriers by throwing a satchel containing a powerful bomb. He takes part in the ground charge afterwards, riding with a gang of vorcha and a number of other hovering assault vehicles towards the colony.

Just as the Blood Pack begins to advance on the vulnerable colony, Alliance shuttles arrive to aid the colonists and begin firing on the mercenaries. Brood's ride gets hit but he manages to crawl out of the wreckage. Brood and the other still-standing mercs exact retribution by shooting down the shuttles with missile launchers, instantly killing most of the Alliance Marines and making easy pickings out of those who survived.

Brood later notices a human's scream and promptly sends a missile in its direction, instructing his underlings to search for survivors as well. He and the other mercs stay back during Archuk's duel with a Marine, preventing a nearby vorcha from taking a shot with his M-29 Incisor when the human comes out to challenge the Blood Pack leader. 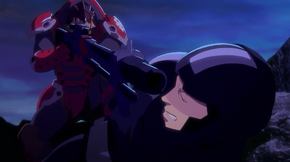 It's soon revealed that the duel was nothing more than a feint by the humans as the Blood Pack positions come under heavy attack from a biotic, a one-woman assault squad and a sniper support. Brood takes the sniper rifle off a vorcha who was just sliced in half by a round and fires at the attacker's direction, grazing the human sniper by the neck. Archuk later orders Brood to take out the one controlling the tech drone that stunned him, and the one-eyed krogan complies.

By the time Archuk is killed, Brood is one of the only remaining members of the Blood Pack force. He takes the opportunity to shoot the biotic down when the latter is distracted by the assault specialist's distress, stomping on the guy's injury and toting his gun to the human's face. The big marine who faced Archuk earlier, named James Vega, manages to incapacitate Brood with a sidearm before anything happens to the downed biotic. The biotic, named Essex, is understandably angry with Brood and begins pulling out a weapon to put the krogan out of his misery. Vega interferes, deciding to spare the krogan and take him prisoner rather than execute him. 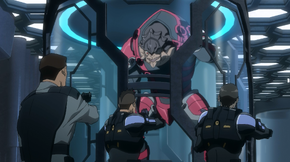 Two years later, during the Collector attack on Fehl Prime, Delta Squad re-encounters Brood in a containment tank in the colony's underground research labs. Brood makes a lot of noise in his cell, punching and kicking the walls until three humans appear to investigate the ruckus he made. When asked about his incarceration, Brood explains that he was deemed too dangerous to be transported to the Citadel for trial, so he was kept in the labs as a test subject. Brood offers the Marines a deal: let him out and he can get them off the planet in return. The trio who found him unanimously decide to leave him in his cage for the moment.

While escaping from a Praetorian that has broken into the labs, Vega decides to take a detour into Brood's cell. The krogan offers to take the remnants of Delta Squad aboard his private ship, still safely hidden in the colony after all this time, as thanks to Vega for sparing his life. With no other option, they free Brood, who keeps his promise.

Brood pilots his ship away from the colony, but the Praetorian pursuing them is a tenacious adversary. It manages to inflict significant damage to his ship, forcing him to land and make repairs after Vega destroys the creature. 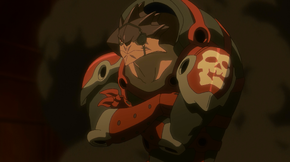 Later, Vega decides to take the fight to the Collectors using Brood's personal arsenal of heavy weapons. Brood puts forth the idea of flying straight through the Collector ship's eye-shaped weapon ports and take the fight to where the enemy least expects it. His idea was accepted as the only shot all of them have, and Vega gives the group something to drink to signify their agreement. Brood takes a swig after Essex, grimacing at the taste and remarking that the swill tastes like varren dung before passing it to the asari next to him.

Brood pilots the ship and blasts a hole in the Collector vessel, aiming to take out its drive core and disable it. He blunders his way around the massive vessel, preferring to punch through walls at random to get at their destination. Before he can fire his weapons at the core, however, the Cerberus operative Messner shoots Brood several times in the head, destroying his remaining eye. With its pilot incapacitated, Brood's ship crashes and Delta Squad is taken prisoner. 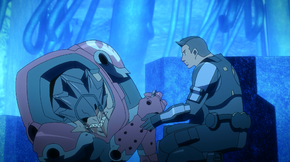 Vega later breaks free of his Collector pod and sees Brood slumped on the floor not far from him. Mortally wounded but somehow still moving despite the headshots, Brood thanks Vega for allowing him to die a warrior's death, and gives the Lieutenant his last power cell before passing. Vega grants him a Spanish benediction, "vaya con Dios, hermano," before pocketing the power cell and turning to the survivors behind.

Retrieved from "https://masseffect.fandom.com/wiki/Brood?oldid=513581"
Community content is available under CC-BY-SA unless otherwise noted.