Many objects require some skill at bypassing imposed security restrictions. The action is usually done with the help of omni-tools.

Bypassing a locked crate, terminal, mineral or door in Mass Effect requires a party member (either a squadmate or Shepard) with sufficiently leveled Decryption and/or Electronics. Interacting with the lock brings up a mini-game, which differs depending on which platform the player is using. In all cases, the mini-game occurs in paused time, so other characters are frozen, damage from Hazards does not accumulate, and so on. In the original game, failing to solve the mini-game on the first try usually removes the manual override button from the object being accessed, leaving an application of omni-gel as the only alternative. Legendary Edition: In Mass Effect Legendary Edition, this behavior has been removed and one can try the manual override as many times in a row as needed.

For PC users, the mini-game presents the player with a set of rotating concentric rings. The player must move an arrow through openings in the rings and reach the center in the allotted time.

For Xbox and PlayStation users, the mini-game is akin to a game of "Simon Says." The face buttons (A, X, B, Y for Xbox; Cross, Square, Circle and Triangle for PlayStation) appear onscreen in formation, and will be highlighted in sequence. As each button is highlighted, the player has a brief amount of time in which to press the matching button on the controller. Depending on the difficulty level of the object, there is a series of three, five or seven button presses. Pressing the wrong button (or none at all) causes the game to fail.

Most objects will allow the player to expend omni-gel in lieu of the mini-game, though only if the party's Electronics/Decryption skill is high enough to at least attempt a manual hack. In other words, omni-gel can be used to skip the minigames but it isn't a substitute for sufficient tech expertise.

Activating the mining laser during the mission to recruit Liara T'Soni and disabling the anomalous signal on the Citadel both have an alternative mini-game involving a sequence.

During the mission on Noveria, restarting Mira's VI core is a type of bypass involving the Towers of Hanoi.

In Mass Effect 2, Bypass and Hacking are no longer associated with abilities: Shepard can perform these with any object regardless of which class and squadmates are selected. 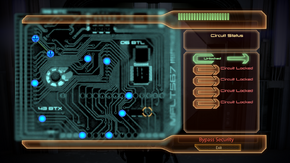 Many objects and areas in Mass Effect 2 can only be accessed after completing a Bypass mini-game. When the player finds an object or doorway that requires Bypass to unlock, a circuit board background appears on screen with an arrangement of three to five pairs of blue nodes. These nodes contain hidden icons that must be matched with each other--each pair is associated with a lock on the right side of the screen that opens when each pair is matched.

In order to reveal the icons, the player must move a cursor over a node. Once that node is selected, however, all other nodes become unviewable, forcing the player to find matches before selecting the proper nodes. Selecting the wrong node or failing to match all nodes before the timer runs out will cause the Bypass to fail. Depending on the object, the player may only get one try.

The nodes are placed at random from a set of terminal points on the circuit board and are connected according to the lines on it. Following the circuit line from one node will lead to the paired node, a technique which can be used in lieu of previewing the icons. However, the close proximity of some nodes and their overlapping of some of the lines may reduce this method's usefulness to some players.

It should be noted that the Bypass mini-game occurs in real-time. If the player takes damage during the mini-game, the Bypass fails.

Mass Effect Legendary Edition permits the player to repeat the puzzle as many times as it takes to succeed for some, but not all puzzles. 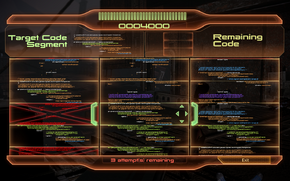 Hacking presents a different mini-game in Mass Effect 2. The Hacking mini-game brings up a display with three columns of boxes that scroll upwards. The boxes contain an assortment of text patterns. The player must select a box that matches the Target Code Segment given in the top-left of the display. Completing the Hack requires the player to do this three times.

Scattered through the columns are red boxes overlaid with an "X." Selecting these boxes will cancel a previously selected box, forcing the player to make up for that box by making another match. Also, the player has three attempts to select the correct boxes; selecting the wrong box counts against these attempts. If the player fails to match all three Target Code Segments within the allotted time or runs out of attempts, the Hack fails. Depending on the object, the player may only get one try.

As with Bypass, Hacking occurs in real time and any damage to the player during the process will cause the attempt to fail.

The player can purchase a Bypass Module (on Illium) and Hack Module (on Omega) in-game that will substantially increase the allotted time for solving these mini-games, allowing the player more time to net the maximum credits on each occasion.

In Mass Effect 3, the bypass minigame mechanic is done away with in favor of a glowing orange holographic loading animation similar in form to the first game PC version's rotating concentric rings interface. After starting the bypass with the omni-tool by interacting with whatever needs to be unlocked (typically only doors) the player remains in full control of Shepard during the hack and may even move around or perform other actions while waiting for the bypass to complete, though moving too far away will cancel it.