Captain Kirrahe is an officer in the salarian military. He is a member of the 3rd Infiltration Regiment STG (Special Tasks Group), a covert operations team that was sent to investigate Virmire, where he discovered Saren Arterius' base of operations. Kirrahe is a brave, intelligent salarian with a good strategic mind; he is able to inspire his men, and is also prepared to make sacrifices if necessary. His second-in-command is Commander Rentola.

After discovering Saren's krogan breeding facility on Virmire, Kirrahe sends a message to the Council asking for a fleet to help destroy it, but a communications disruption results in a garbled message, and as a result only the SSV Normandy is sent to investigate. He is suspicious of Wrex (if Wrex was allowed to join the crew), describing the salarians' intervention in krogan evolution as 'a mistake', but allows Commander Shepard to deal with Wrex's anger.

Kirrahe develops a plan to destroy the facility, with the help of Shepard's crew: to place an improvised nuclear bomb at a critical part of the base. He is personally involved, leading three teams of his salarian officers (along with either Ashley Williams or Kaidan Alenko) to draw out the geth, knowing they would take heavy losses. In light of this, he names his teams after key salarian settlements (Aegohr, Mannovai and Jaëto) to remind his men what they are fighting for. Kirrahe hears some dissent amongst his men and gives them an inspirational speech. In it, he explains that though they are covert operatives rather than heavy troopers, they are still part of a proud tradition – "We would be legends, but the records are sealed."

Shepard can assist Kirrahe's assault along the way by sabotaging geth positions and listening to how the salarian attack is progressing over radio chatter. While Kirrahe takes personal command of Mannovai Team, Aegohr Team is given to either Kaidan or Ashley. Aegohr Team provides fire support to Mannovai Team and manages to evade the geth flyers that forces them to hunker down, then later spearheads the attack on the second AA gun. Jaëto provides additional support.

Without help from Shepard's team, Kirrahe is killed by the geth air support midway through the operation. Either Ashley or Kaidan takes over command of the salarians after his death and coordinate the attack from then on.

However, with Shadow Team's help, Kirrahe can escape with Shepard aboard the Normandy. Kirrahe and his surviving men can be found in the engineering section, sympathetic to Shepard's loss; Kirrahe says they will get off when the Normandy next makes port and find their way home. He hopes he and Shepard might have the opportunity to work together again in the future.

“You all know the mission and what is at stake. I have come to trust each of you with my life, but I have also heard murmurs of discontent. I share your concerns.
We are trained for espionage. We would be legends, but the records are sealed. Glory in battle is not our way.
Think of our heroes: the Silent Step, who defeated a nation with a single shot. Or the Ever Alert, who kept armies at bay with hidden facts.
These giants do not seem to give us solace here, but they are not all that we are. Before the network, there was the fleet. Before diplomacy, there were soldiers.
Our influence stopped the rachni, but before that, we held the line. Our influence stopped the krogan, but before that, we held the line!
Our influence will stop Saren! in the battle today, we will hold the line!” 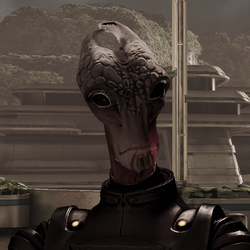 If Kirrahe survived the events on Virmire in 2183, he is on Sur'Kesh during the Reaper invasion in 2186. Now promoted to Major, he is present at an STG facility that runs experiments on female krogan, loitering near the elevator entrance of the base.

If Kirrahe is spoken to before entering the base, he mentions that it was he who found the krogan females on Tuchanka and brought them to Sur'Kesh. He promises Shepard that regardless of what the politicians decide, he would gladly support retaking Earth. If Garrus and/or Liara is present, he greets them enthusiastically, remarking that the Reapers have a way of bringing them together. If Javik is present, Kirrahe repeatedly assumes Javik is a genetically modified drell or turian for use in some psychological tactic, rather than an actual living Prothean.

When Commander Shepard descends down the facility to extract the only remaining female krogan, Cerberus launches a surprise attack, attempting to prevent Shepard from acquiring the krogan. During the fighting, Shepard encounters Kirrahe in a skirmish with Cerberus troops. Demolishing a wave of troops with a Scorpion pistol, Kirrahe expresses his pleasure at getting to work with the Commander again before covering Shepard's team in the firefight. When the Cerberus troops are defeated, Kirrahe stays behind to protect Shepard's flank while the Commander proceeds to the Species Observation Area.

If Kirrahe did not survive Virmire, Lieutenant Tolan takes his place at the beginning of the mission. An unnamed soldier, in Kirrahe's stead, also attempts to cover Shepard but does not survive.

Following the mission on Sur'Kesh, Major Kirrahe sends Commander Shepard an e-mail, again promising his support against the Reapers.

During the Cerberus attack on the Citadel, Kai Leng threatens the salarian councilor's life. If Kirrahe is alive but Thane Krios is dead or never spoke with Shepard before the attack, then Kai Leng attempts to kill the councilor but instead shoots a cloaked Kirrahe at point blank.

Kirrahe manages to limp a considerable distance in pursuit before collapsing at a door. He claims he was right in saying it was an honor fighting with the Commander again if they have shared camaraderie. Otherwise, Kirrahe quips he never liked the idea of getting old anyway. He entrusts Shepard with the assassin's pursuit before dying.

Otherwise, if Thane is alive and if Shepard spoke to Thane before the attack, Thane saves the salarian councilor's life in Kirrahe's stead and is wounded in the process. If both Kirrahe and Thane are dead (or Thane hasn't been spoken to), Kai Leng succeeds in assassinating the councilor.

If krogan support is lost due to Wrex's death, Kirrahe takes his place on Earth during the battle for Earth, addressing members of his unit in the same manner Wrex would have addressed his krogan.

“You all know the mission and what's at stake. While this may not be our world, it is our galaxy!
Today, humanity has asked for our help--and today, we will deliver. In this war, we are all citizens of the cosmos!
There is no enemy we cannot defeat together, no threat we cannot neutralize, no challenge we cannot overcome!
Someday, when the Reapers are just a memory, the nations of the galaxy will come together and remember this place--this very ground--and say:
"The salarians were here! They did not fail! They did not falter, and they did not surrender!"”