On Palaven, Castis personally taught Garrus how to shoot during the latter's childhood. His son couldn't hit the targets and was getting tired of hefting the sniper rifle, but he told the young turian if he gives up on something when things get hard he wouldn't make it anywhere in life. Imparting his responsibilities as a father in teaching Garrus how to be an adult, Castis commanded his son to try again.

Sometime afterward, Castis' wife was involved in a hit and run accident. As he was on the Citadel working at the time, he called to check on her as soon as he heard, but was discouraged by his wife from returning to Palaven, citing the distance.

Garrus later joined C-Sec and became colleagues with Castis. They verbally clashed on one particular case Garrus was working on, as Castis let the suspect go due to Garrus' rule-breaking approach to building up a case. Garrus was fed up with the seeming inaction and red tape, but Castis was adamant on adhering to the rules: in a place teeming with millions of people with their own ideas on how society works, some days only C-Sec holds the place together. He wants his son to do things right, or don't do them at all. Father and son steered clear from each other after this.

After the battle of the Citadel, Garrus went after the suspect Castis cut loose and physically assaulted him. When Castis heard about what happened, he threatened to lock his son up personally if he persists in his way of doing things.

Castis has retired and moved back to Palaven by 2185. One day he received a call from Garrus, who claims he was on "target practice". Soon it became apparent that Garrus was under heavy fire - he was making his last stand on Omega as the sole survivor of the vigilante group he headed. Castis listened as his son tried to reconcile with him, and in response he gave combat advice on learning, moving "targets". He advised Garrus that as long as he has at least one bullet left he can still get the job done no matter how bad things are, and beckoned him to come home afterward to sort things out.

Castis talked Garrus out of becoming a Spectre sometime during his training, as Castis believed the Spectres were too powerful and hated the concept of someone not being held responsible by the law.

Garrus resigned from C-Sec with the intention of joining Spectre Commander Shepard on a mission to hunt down fellow turian and rogue Spectre Saren Arterius. Castis took Garrus' resignation hard, worried that his son would become too much like Saren, and claiming that his son was being too rash and impatient. 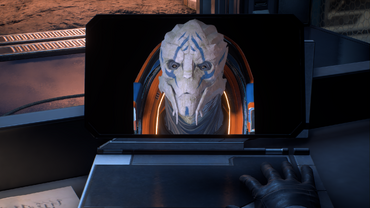 During his time with C-Sec, Castis struck a friendship with human military attache Alec Ryder. He was one of the few who still kept up that friendship when Alec was discharged from the Alliance.

In a memory that may be reviewed by one of Alec's children, Castis contacts Alec and relays to him what he heard about the Reapers. Garrus, still working for C-Sec at the time, told his father the Citadel Council thinks Shepard's story is bogus. Castis however heard otherwise that the Council was beginning to wonder if it was true.

Explaining the Reapers' modus operandi to Alec, Castis vets Shepard's veracity based on Garrus' word the Commander is as level-headed as they come and additionally an N7 like Ryder. If Shepard says the Reapers are coming, Castis tells Alec he doesn't want to be around when they arrive.

Provided Garrus survived the suicide mission, Castis hears from him after Shepard was detained by the Alliance. His son laid out everything that had happened over the last three years: from the fight with Saren, to the Collector Base, and the eventual return of the Reapers. Castis, to Garrus' surprise, listened to what his son had to say and believed him. He took the information to Primarch Fedorian who didn't believe Castis at all, but Castis pushed enough to get Garrus a task force established to help Palaven deal with the incoming Reaper threat.

Castis and Solana are stranded on Palaven when the Reapers finally attack, unable to contact Garrus amidst the chaos. He manages to tell him more about their situation when the Reaper forces begin pushing the turian and krogan militaries back. Solana had broken her leg, but before anything else could be revealed, communications were cut.

Garrus later hears that both Castis and Solana made it off-world, though their ultimate fate remains unknown.

Retrieved from "https://masseffect.fandom.com/wiki/Castis_Vakarian?oldid=515370"
Community content is available under CC-BY-SA unless otherwise noted.