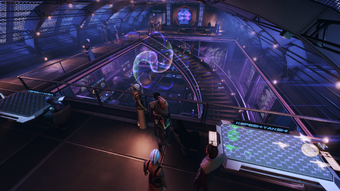 The Castle Arcade is an electronic gaming arcade located in the Citadel's Silversun Strip.

Three interactive arcade games can be found in this area: Shattered Eezo, Claw Game, and Relay Defense. Kepesh-Yakshi and Towers of Hanoi consoles are visible, but Shepard cannot play these games. Various teammates can be encountered here, and many prizes – ranging from weapons mods and Personal Apartment accessories to credits – can be obtained by playing the available games. 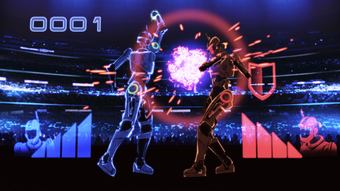 In this arcade game, two mechs – one controlled by the player (blue), another CPU-controlled (orange) – engage in a simple boxing match, and the player must keep on defeating the increasingly harder opponents to attain a high score. The difficulty stems from the fact that the player bot regenerates only part of its health after each match, while the next enemy always has a full health. Their punches also increase in power progressively.

Defensive strategies are useful here. For example, use a blocking posture until the opponent begins to charge a punch, and then land 3 quick jabs to interrupt the opponent's charge. Immediately falling back to a defensive posture will prevent unnecessary damage. This strategy can net the player an average of 100 points per round.

When meeting with Jacob Taylor, Shepard can fight him as an adversary controlling the orange mech. 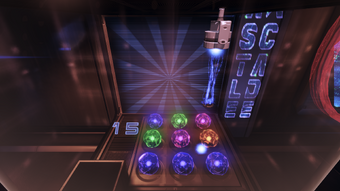 The Claw Game consists of moving a claw above one orb of shifting colours in the claw game machine and selecting it. The orbs have 4 colors, each representing a different prize tier (green, blue, purple, orange in ascending order).

The player is given 20 seconds to pick a prize. When the time's up, the claw still extends downward. Whatever ball that happens to be closest to the claw gets magnetized even if the claw is nowhere near it. It is almost impossible to come up empty-handed unless the claw was never even moved from the general region of its initial position or is anywhere along the extreme left.

After a random setup, the orbs will change colors simultaneously, alternating between green in one phase and blue or purple in the other. Sometimes, the green phase will be split in half, with the first half being an orange orb. This will always happen for two consecutive green phases before it reverts back to green only. 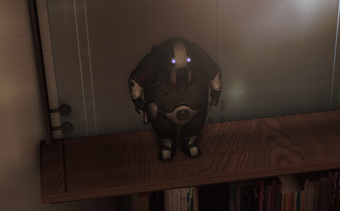 The game yields 4 Weapon Mods from the orange ball (Assault Rifle Ultralight Materials, Pistol Power Magnifier, SMG Power Magnifier, Sniper Rifle High-Velocity Barrel), the plush volus doll from the purple ball, and up to 7 music tracks for the Personal Apartment from both the blue and green balls before defaulting to credit payouts.

Zaeed Massani is met here avidly playing this game to obtain a prize for a child, and a conversation with him must be completed before this game is available for Shepard to play. The child in question got bored and left before Zaeed obtained the Volus Doll prize the child wanted, so he ends up giving it to a nearby asari before asking for another round sponsored by Shepard. Shepard can obtain the same Volus Doll for his/her personal apartment as described earlier. 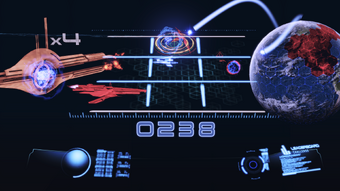 This arcade game consists of eliminating enemies spawning at various locations on a 3x3 grid while sending allied shuttles across clear rows to escape via the mass relay.

There are two types of enemies: one that looks like a turian fighter that deals light damage to the planet, and one that looks like a turian cruiser that deals heavier damage. Incoming ships' positions are denoted on the board by flickering circles outlined in red. Damage to the planet is denoted by swathes of land overlayed in red, and there is no way to reverse or heal that damage.

Score multipliers increase the worth of these ships, for up to a maximum of x4. Obtain and maintain the multiplier by keeping a steady stream of allied shuttles heading for the relay. Without score multipliers, the turian fighter is worth 1 point and the cruiser is worth 2 points.

At the game's start, it takes them a while to shoot your planet or spawn, but as the game progresses, their spawn frequency and reaction times increase. A useful tactic (but at the cost of breaking a score multiplier streak) if missiles run out mid-game is to send shuttles on suicide runs against these ships.

The high score for this mini-game is held by Mouse (unlike the others on Silversun Strip, which are held by Aria T'Loak). Beating Mouse's high score yields a Shotgun Ultralight Materials mod. 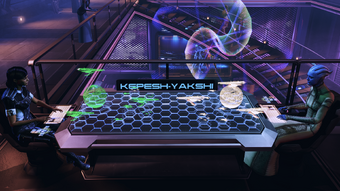 Kepesh-Yakshi is a game that translates into "blade of the night winds" in asari language. Or, as Shepard puts it, "space-chess". Like chess, this game apparently requires strategic and incisive thinking in order to win, with its own system of moves, tactics, diversions and gambits like the "Bay-Lucien Gambit".

Four tables for this game are available on the upper floor of Castle Arcade, but Shepard cannot play the game. However, Samantha Traynor is seen playing this game when Shepard meets her in this location after receiving an email from her, supposedly for lunch.

Kepesh-Yakshi is apparently set up with a planet, called "homeworld", and some ships on opposing sides of the board. Pieces are colored yellow and green according to player ownership. Known ships are dreadnoughts, cruisers, frigates, and evac shuttles. Casually sacrificing ships causes the game to shock the player doing the deed; neural feedback designed to deter players from doing so. One of the known ways to win is to "capture" the opposing player's planet, and losing means the player gets a shock nasty enough to knock them off their seats.

A Towers of Hanoi console exists below the staircase, but Shepard declines to play it when interacted with.