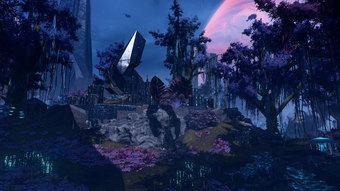 The Central Wilds is a region on Havarl east of Pelaav Research Station. South of it lies one of the area's monoliths, further east is the Chasm of the Builders, and to the north is the entrance to the Remnant Abyss.

A raised Remnant platform with several jutting small columns around a short tower is a distinctive mark of the area. It used to have a walkway connecting it to the Pelaav outpost, but the walkway has since fallen into ruin. This platform also has room for a Forward Station.

Jaal Ama Darav advises being on alert against roving Roekaar in the area, as well as to avoid eating the local plants.

Retrieved from "https://masseffect.fandom.com/wiki/Central_Wilds?oldid=521428"
Community content is available under CC-BY-SA unless otherwise noted.