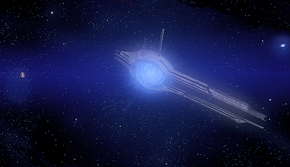 The Charon Relay is a mass relay in the Sol system of the Local Cluster that orbits Pluto. Encased in a layer of ice hundreds of kilometers thick for thousands of years, the Charon Relay was originally believed to be nothing more than one of Pluto's moons. Following its discovery and reactivation by humanity in 2149, the Charon Relay has served as the point of access between Earth, the cultural and economic heart of human civilization, and the rest of the galaxy.

In 2149, a human science team exploring the edge of the system near Pluto discovered that Charon was not a moon at all, but an enormous piece of ancient technology known as a mass relay that had been used by the Protheans. The discovery was not completely surprising, however, since the Prothean ruins found on Mars in 2148 had mentioned such a device. While the scientific theory behind the creation of mass relays was still beyond humanity's reach at the time, scientists were able to reactivate the dormant relay.

Exploratory probes sent through the Charon Relay immediately dropped out of contact, and it was determined that the only way to learn what was on the relay's other side was to send actual explorers through. Led by Jon Grissom, a team of brave men and women willing to risk their lives traveled through the relay, and discovered that it led to Arcturus. Their successful return made them heroes, and Jon Grissom became the face of the Systems Alliance as humanity entered a new age of unparalleled discovery and expansion.

The operation of the Charon Relay gradually had the side effect of circularising Pluto's elliptical orbit.

Provided Commander Shepard chooses to activate the Crucible in the battle for Earth, the Crucible fires at the Charon Relay to transmit its energy across the galaxy. The Charon Relay and the rest of the mass relays across the galaxy are severely damaged, but are eventually rebuilt with or without the Reapers' help depending on Shepard's final choice.