Chorban is a self-proclaimed salarian scientist who has developed a scanner to obtain readings of keepers. Commander Shepard first finds him at the Citadel Tower, attempting to get a reading on a stationary keeper.

Chorban and his partner Jahleed stole the plans for an advanced medical scanner from the company they were working for. They reconfigured them to scan the keepers. Chorban is very interested in learning more about the keepers, since very little is known about their activities and how they accomplish them. However, though he does not believe his scanner disturbs the keepers, he is hesitant to continue his research overtly, lest the authorities take a dim view of his curiosity in the creatures. Shepard can volunteer to continue the research, and later help Jahleed in his row with the salarian.

Chorban can be found in the lower markets of the Wards if Shepard agrees to mediate in the conflict. He has a couple of bodyguards with him, but he sends them away if Shepard is already aware of his research. He amicably discloses the truth. 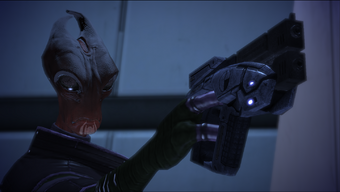 If Shepard was ignorant of Chorban's activities before talking to Jahleed, Chorban turns hostile and assumes the Commander was sent by Jahleed to turn over the initial keeper data. Disbelieving any claims to the contrary, he and his two Salarian Bodyguards engage the Commander in a firefight, ultimately losing. He decides his life is worth more than the data and begs Shepard not to kill him.

Whatever the context of the meeting in the markets, Chorban admits he and his partner lost perspective, but he is still very much interested in learning about the Citadel's mysterious caretakers, and still offers Shepard the chance to scan (or continue scanning) the keepers for him. He doesn't really want to kill Jahleed, but he supposes the volus wants the discovery all to himself.

Chorban has three possible fates: The Commander agrees to take up (or continue) the keeper scanning for him, he's discouraged from continuing the research, or Shepard kills him for the hassle if their meeting began in a fight.

If Shepard did not kill Chorban in 2183 and scanned all or most of the keepers, he contacts Shepard via email to give a summary of his findings – entitled "Concerns re: keepers".