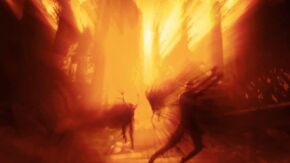 The Prothean beacon uploaded its knowledge into Lt. Commander Shepard on Eden Prime, causing confusing dreams and visions. While the imagery was becoming clearer with time, the overall meaning of the beacon communication remained elusive until Shepard gained the Cipher.

Initially brought up by Liara, she suggested that understanding the Prothean message would be highly dependent on a certain point of view, what Carl Jung described as the collective unconscious. The 'cipher' needed to comprehend the images implanted in Shepard's mind was the cultural knowledge of a Prothean: the archetypes, biological instincts, and common experiences universal to the race. Since the Protheans had been dead for millennia they were initially unsure of how they would acquire the necessary 'cipher'.

The Cipher was used by both Saren Arterius and Shepard to allow them to interpret the visions held in the Prothean beacons on Eden Prime and Virmire. It is the cultural context, knowledge and experience of the Prothean race. This unique racial perspective allows a mind to comprehend information as a Prothean could, though it takes time for a non-Prothean mind to become accustomed to it. Without the Cipher, the images in the beacon's vision don't make sense to non-Protheans who lack the necessary attitudes, mindset, and cultural experience to correctly interpret them. Describing the Cipher is impossible; it would be like trying to explain colour to a creature without eyes.

Commander Shepard gained the Cipher with the help of Shiala, an asari formerly working for Saren who was offered as a 'sacrifice' to the Thorian. The Thorian itself gained the Cipher after it watched and studied the Protheans on Feros, even consuming some of them when they died and assimilating their knowledge. When Shiala melded with the Thorian, she shared the Thorian's consciousness, and thus gained the Cipher left by the long-dead Protheans. After explaining its importance, Shiala transferred the Cipher directly to Shepard's mind. The experience left the Commander badly shaken, but was necessary to find the Conduit.

After receiving the Cipher, Shepard was able to make more sense of the vision — with Liara T'Soni's help — and also understand the Prothean language.

The Cipher proves useful in understanding archived video footage containing the necessary codes for the stasis pod containing a surviving Prothean named Javik and later activating another beacon on Thessia.