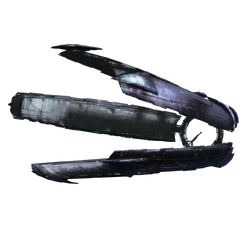 For additional information and statistics, see Codex/Citadel and Galactic Government.

Supposedly constructed by the long-extinct Protheans, this colossal deep-space station serves as the capital of the Citadel Council. Gravity is simulated through rotation, and is a comfortable 1.02 standard G's on the Wards and a light 0.3 standard G's on the Presidium Ring.

The asari were the first race to discover the Citadel in 580 BCE, soon after learning to use the mass relays. They were joined shortly by the salarians, and soon after, the volus. As other races were contacted by the asari, or discovered the station independently, they gained embassies on the Citadel and came under the jurisdiction of the growing Council, eventually comprising the asari, the salarians, and the turians.

Strategically located at the junction of a number of mass relays leading to various parts of the galaxy, the Citadel quickly became a hub of activity. The station was chosen to house the Citadel Council, thereby cementing its importance in the galactic community. It is accepted to be the political and cultural heart of Citadel space, the unofficial name given to all systems that fall under the Citadel species' control.

Even after thousands of years of occupation, the Citadel retains many secrets. The precise age of the station is not known, nor what resilient material it is constructed from. The location of the Citadel's core and its master control unit, regulating systems such as life support and navigation, remain hidden. The most visible, and perhaps intriguing, mystery of the Citadel concerns its caretakers, the keepers. These mute alien creatures maintain the Citadel's vital systems, and can be seen working throughout the station, yet, despite this, little is known about them. 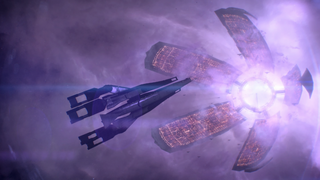 The Citadel was not, in fact, constructed by the Protheans; they were simply the last race to make use of the station before the asari arrived. It, and the mass relays, are the creations of the Reapers, and were built to help facilitate their cycle of galactic genocide. The Reapers were also responsible for the placement of the keepers on the station, in order that the occupying races would not discover the Citadel's key functions. The station is actually an inactive mass relay leading to dark space, designed as an elaborate trap so the Reapers can wipe out the heart of galactic civilization and leadership in a single, devastating strike.

According to Vigil, the last Protheans used the Conduit and traveled to the Citadel to try and break this cycle. They succeeded, but it was already too late for the Protheans. Because the Conduit portal only linked in one direction, Vigil feared that the Prothean scientists, unable to find any food or water on the Citadel, slowly starved to death. Due to this Prothean intervention, the Reapers were forced to travel to the Milky Way without the help of the mass relays, at normal FTL speeds.

During Commander Shepard's visions on Eden Prime and Virmire, very brief glimpses of the Citadel can be seen (namely the Presidium ring from above, and the Ward Arms) presumably as part of the Prothean warning that the station is a dormant trap. However, this part of the vision appears to be too fragmented to be fully recovered, as neither Liara T'Soni nor Shiala mention it. 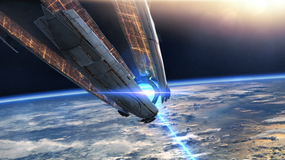 At the height of the Reaper invasion in 2186, the races of the galaxy unite to construct the Crucible, a superweapon of ancient design with the power to destroy the Reapers once and for all. The final and most important component of the Crucible is the Catalyst, which is revealed to be part of the Citadel. Unfortunately, the Illusive Man learns of this and flees to the Citadel, where he alerts the Reapers of the galaxy's plans. The Reapers respond by seizing control of the Citadel and moving it into Earth's orbit to protect it. The station's arms are closed, sealing it off, thereby preventing the Crucible from docking. The Alliance leaders determine that the only way to get the Citadel's arms to open is to get someone inside the Citadel and manually open the arms.

During the battle for Earth, Commander Shepard boards the Citadel via a transport beam and opens the Wards to allow the Crucible to attach to the station. Shortly afterward, Shepard meets the Catalyst - now revealed to be the Intelligence that controls the Reapers. Shepard must then choose between destroying the Reapers, controlling them, or merging organic and synthetic life. Upon deciding, the Crucible releases its energy and the Citadel, with its Wards now open to their maximum extent, amplifies it and transmits it to the Charon Relay, which in turn transmits it to the rest of the Mass Relay network. 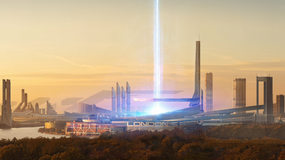 For a full map of the Citadel in the first Mass Effect game including keeper locations, see here. 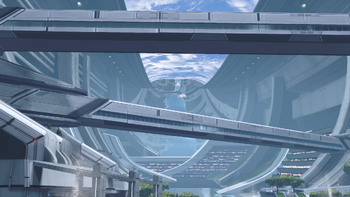 The Citadel is a massive construct, similar in shape to a pentagram. It consists of a central ring 7.2 kilometers in diameter, from which five arms protrude, each 43.6 km long and 330m thick.

The station is capable of closing in on itself, via the convergence of its five arms, transforming it into a long, impenetrable cylinder. However, the Citadel is only closed in times of emergency, and normally the station retains its 'open' appearance.

The central ring and five arms are home to the Presidium and Wards respectively; the spaceports are also located on the central ring, as it is the center of rotation, facilitating easier access for ships attempting to dock with the station.

The Citadel has a labyrinthine interior superstructure, accessible through keeper tunnels.

The Presidium is a massive, park-like complex containing the offices of the various branches of the galactic government, as well as the embassies of all the races represented in the Citadel. There are also shops, restaurants and recreational facilities, serving the wealthy residents who live and work throughout the sector. The Presidium is monitored by a Virtual Intelligence named Avina, and, unlike the Wards, incorporates an artificial 20-hour day schedule: lights are dimmed, and the holographic "sky" darkened, for 6 of the 20 hours, imitating the familiar day-night cycle.

The tower at the center of the Presidium houses the Council Chambers and the main traffic control for the station—any ship within a few thousand kilometers comes under the jurisdiction of Citadel Control. The Chambers themselves are not open to the public and access is only granted to officials and those with special clearance. They are beautifully furnished, with cherry trees and fountains, as well as numerous staircases leading up to the central platform where the Council convenes. 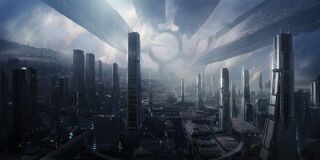 The "arms" of the Citadel, known as the Wards, constitute the residential and commercial sectors of the station. Densely populated, housing millions of residents from many galactic species, the Wards are akin to Earth cities such as Hong Kong and Singapore.

Numerous skyscrapers rise from the superstructure, sealed against vacuum, as breathable atmosphere is only maintained to a height of approximately 7 meters. Unlike the Presidium, there is no artificial day-night cycle; as a consequence of this, commercial activity rarely ceases, and residents work and rest according to personal need. Barla Von appropriately dubs the area the cultural heart of the Citadel, and therefore of Citadel space.

The Wards are policed by the Citadel Security Services (C-Sec), whose offices and custody suites are located in the Lower Wards. Flux is a popular night club, also located in the Wards. The Wards are also home to the Silversun Strip, a bustling commercial area featuring Silver Coast Casino, Castle Arcade, Armax Arsenal Arena, and the apartment complex Tiberius Towers. Below the Wards, the Citadel Archives function as a repository for artifacts and records deemed important. 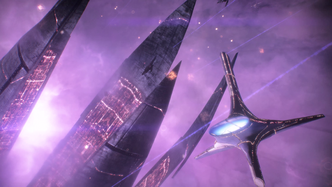 As befits such an important galactic location, the Citadel boasts multiple layers of defense. The first is the Serpent Nebula itself: the nebula's composition is such that it is difficult for attacking fleets to navigate, thus preventing them from launching a concerted attack.

Another link in the Citadel's defensive chain is the Citadel Fleet. The fleet is a massive task force consisting mostly of turian vessels but also including ships from the other Council races. The Citadel Fleet, led by the imposing asari dreadnought Destiny Ascension, constantly patrols the space around the station. However, should any aggressor manage to break through the Citadel Fleet, reinforcements from all over the galaxy are only minutes away, due to the network of mass relays located nearby.

If any enemy gets close enough, the station is capable of closing in on itself to form a long, armored cylinder, 45 kilometers in length. The station's hull is sufficiently strong that, even when subjected to the most advanced weaponry available, it would take several days of sustained bombardment to inflict any serious damage to the superstructure.

The station also boasts its own internal security force, known as C-Sec. The 200,000 officers patrolling the station handle everything from customs to hostage negotiations.

The Citadel also has turrets to ward off small craft, such as dropships.

Duct Rats are poor, homeless children of the Citadel who travel in the ventilation system of the station. They often die by sudden deadfalls; laceration by fan blades; starving to death; or suffocating because of exposure to the open vacuum of space. Oftentimes, they are just never found. Thane Krios sometimes used duct rats, Mouse among them, to gather information on his targets in the Citadel.

The keepers are a mysterious, bio-engineered insectoid race that are native only to the Citadel. They are found throughout the Citadel in random locations, and are harmless. They are believed to be created by the Protheans as the caretakers of the Citadel.