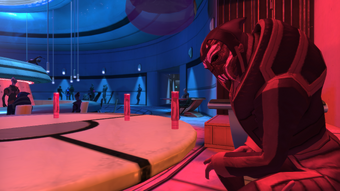 The Asari Consort, Sha'ira, has asked you to speak to General Septimus. She's concerned that this former client is spreading false accusations and could damage her reputation.

This assignment can be acquired once you're permitted to explore the Citadel Presidium for the very first time, after a meeting at Ambassador Udina's office.

Visit the Consort's Chambers on the Presidium and speak to Nelyna. After you finish speaking to her, Sha'ira will ask to see you. She explains that she and her friend Septimus have had a falling-out, and that he has been spreading lies about her as a consequence. Hoping he will listen to a fellow soldier, she needs you to speak to him on her behalf.

Head down to Chora's Den in the Wards and speak to Septimus. He is smitten with Sha'ira, but she had to reject his advances because of her position. Go through the dialogue, choosing the obviously correct options to convince Septimus. If you give up, this finishes the assignment but you will no longer be welcome at the Consort's Chambers. The Charm (skill level 4) and Intimidate options here (skill level 4) do not result in any Paragon or Renegade points. 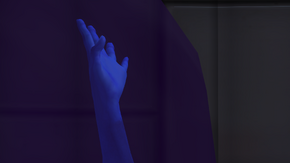 Eventually Septimus will give in and agree to start acting like more of a general. He then asks for a small favour, to fully clear Sha'ira's name. Septimus added to his campaign against Sha'ira by telling an elcor diplomat, Xeltan, that the Consort gave up his secrets, when in reality Septimus discovered them himself, and spread the elcor's secret out of spite. Simply talk to Xeltan, at the elcor-volus embassy, to complete Citadel: Xeltan's Complaint, then return to Sha'ira to complete the assignment.

Sha'ira will reward you with credits, XP, and 'a gift of words' that differs according to your chosen pre-service history and psychological profile. During the conversation, choose "Glad to help." for 2 Paragon points, or "Let's talk payment" for 2 Renegade points. Choosing "No problem" results in no morality points.

If you express dissatisfaction with her reward (by choosing "That's it?") Sha'ira will initiate a sexual encounter with you. This does not result in any morality points either way.

I offer a gift of words, an affirmation of who you are, and who you will become

The second phrase of the gift of words is based of Shepard's pre-service history.

This may be who you are, but it is not who you will become. It only forms the basis for your future greatness Commander. Remember these words when doubt descends, Commander.

If the player does complete the Asari Consort assignment, Sha'ira will send Shepard a private email re-affirming her previous "gift of words." She also highlights the importance of winning over allies for the commander's future battles. However, due to a bug with the data import, the Galactic News will report that she is leaving the Citadel over rumors concerning her intelligence leaks, regardless of the player having reconciled Septimus and Xeltan.

If you completed Citadel: Xeltan's Complaint before returning to her, Sha'ira will give you a bonus reward, a small trinket that appears to be of Prothean design. This can be used on Eletania, a planet in the Hercules system of the Attican Beta cluster. Use the trinket when examining the anomaly at the ruins, and you will experience a short burst of information about the Protheans studying cavemen on Earth. If you do not speak to Xeltan before returning to Sha'ira, her door will be locked and you won't get the trinket.

This assignment is connected with Citadel: Xeltan's Complaint →

Retrieved from "https://masseffect.fandom.com/wiki/Citadel:_Asari_Consort?oldid=492727"
Community content is available under CC-BY-SA unless otherwise noted.