C-Sec Officer Jordan Noles has requested assistance tracking illegal use of batarian diplomatic codes. Consult the Spectre terminal and then locate access points on the Citadel.

Speak to C-Sec Officer Jordan Noles on the Presidium Commons. She is standing just outside the C-Sec Outpost.

First head to the Spectre area in the Citadel Embassies and read the message about the batarian codes. Click "Enable" while viewing the message. After enabling access, your Citadel map will be updated with the location of the first console. Find the consoles at the following locations and in the following order:

Note that there are two versions pertaining to how the batarian codes were used: someone used the codes to secure more provisions for the batarians, or they were used in sabotages targeting humans and Alliance military assets on the Citadel.

After retrieving the final code at the Docks, someone puts a pistol in the Commander's back. It turns out to be none other than Ka'hairal Balak, if you did not outright kill him in Bring Down the Sky (he will appear even if the DLC was not completed at all). Infuriated and wanting to take vengeance for the destruction of Bahak (regardless of whether or not you did the Arrival DLC for Mass Effect 2), he blames Shepard for everything that has happened to the batarians. You can either kill him or pass a Reputation check. 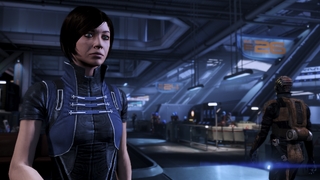 If you do not kill Balak, he leaves, but not before grudgingly committing the batarian fleet to the war. If you kill Balak instead, the Alliance Third Fleet War Asset will have its value decreased.

If you killed Balak in Bring Down the Sky, Shepard will meet up with Noles in Cargo Hold C, near the Batarian State Arms kiosk (and the preacher who laments about the lost Pillars of Strength). Noles has a batarian in custody, who's also angry about his people's condition and having to steal scraps for refugees. In contrast with Balak, if you completed Arrival, this batarian recognizes your role in it. There's no option to kill this batarian: Noles merely hauls him off if you don't want to (or can't) convince him to rally his people to your cause.

Whatever the previous circumstances, as long as Balak or the unnamed batarian is convinced the batarian fleet is added to your War Assets and you will gain 210 experience after completion of this mission.

Retrieved from "https://masseffect.fandom.com/wiki/Citadel:_Batarian_Codes?oldid=516544"
Community content is available under CC-BY-SA unless otherwise noted.