A C-Sec officer needs a way to detect or deactivate Cerberus turrets left behind on the Citadel. Find Cerberus automated turret schematics and bring them to him in the Presidium Commons.

Alternative journal entry:
Schematics for Cerberus automated turrets were recovered from Tuchanka. Find someone on the Citadel who can use them.

Eavesdrop on a C-Sec Officer in the Presidium Commons after the attack on the Citadel. He is standing next to a volus on a balcony just outside of the vid-wall hallway, where two nurses discussing a traumatized asari used to perch before the attack. He will mention needing to deactivate Cerberus turrets that are threatening civilians.

Alternatively, the mission can be triggered by acquiring the Turret Control Schematics during Tuchanka: Bomb prior to encountering the officer. However, it still can only be turned in after Priority: The Citadel II. 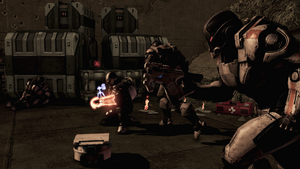 The C-Sec Officer is available only after the attack on the Citadel, although it is possible to obtain the schematics first. It is advisable to complete the timed mission Tuchanka: Bomb first, before approaching him.

Retrieve the schematics for the Cerberus turret from some crates before meeting with Lt. Victus.

If you did not retrieve the schematics during the mission, you can purchase them at the Spectre Requisitions terminal in the Citadel Embassies for 1,000 credits.

When Cerberus forces fled the Citadel after their failed coup, they left behind automated turrets and proximity charges. These were likely intended to further undermine morale on the Citadel. Improving C-Sec's ability to disable Cerberus antipersonnel devices would reduce civilian casualties and allow C-Sec to focus on finding Cerberus sympathizers. If granted the necessary funding, Alliance operatives familiar with Cerberus tech can obtain control schematics for the turrets.

When you hand over the schematics to the officer, you will be given 5 Reputation, 30 experience, and 1,000 credits. The Citadel Defense Force War Asset will be updated as well.

Retrieved from "https://masseffect.fandom.com/wiki/Citadel:_Cerberus_Automated_Turret_Schematics?oldid=516536"
Community content is available under CC-BY-SA unless otherwise noted.