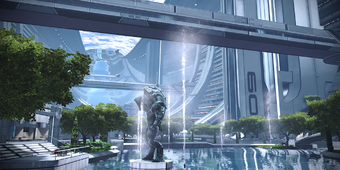 You convinced Rebekah to get the gene therapy that will ensure her child a life free from heart disease. She and Michael reconciled their differences.

Alternative journal entry:
You convinced Michael to respect Rebekah's wishes concerning her unborn child. She and Michael have reconciled their differences.

Alternative journal entry:
You were unable to help Rebekah and Michael resolve their differences regarding what kind of therapy Rebekah's unborn child should have. Hopefully they will work out the problem on their own.

This assignment becomes available after completing any of the main mission worlds, i.e. Therum, Noveria or Feros. When you return to the Citadel, Rebekah Petrovsky and Michael Petrovsky are standing next to the Rapid Transit stop outside Barla Von's office.

This assignment's journal entry is only acquired once it has actually been resolved one way or another.

Rebekah Petrovsky's husband, Jacob, died recently of a rare heart condition and Rebekah is carrying his baby. Apparently there's a risk the baby could develop the same heart condition, and Michael Petrovsky is telling Rebekah to get the condition corrected with in utero gene therapy. Rebekah disagrees. She's been reading extranet reports that say this gene therapy could be dangerous and there are other - admittedly less effective - treatments available.

This assignment only requires you to argue for or against Rebekah getting the therapy.

Choosing either to let her decide or telling her to get the therapy will bring you to another conversation tree, where you have several options where to give up and stay out of it, and get no gain, or you can Charm or Intimidate to force one of them to see your way.

Rebekah and Michael will be arguing yet again over the child (a year old this time) and Jacob's legacy as his father. In 2185, they can be found on the 26th floor of the Zakera Market, though you will not be able to intervene this time. If you let Rebekah decide what's best for the child, Michael can be heard calling Jake a "perfectly fine toddler" now. If you convince her to do the gene therapy, Rebekah's prejudice against them seems to be gone and they will be discussing further modifications to Jake. Michael, when prompted by Rebekah, will eventually say "I don't know. Maybe we should ask random people on the street what they think". Rebekah can't make up her mind as she vacillates over several possible alternatives.

Rebekah and Michael can be found on the Presidium Commons (post Priority: Palaven), again arguing over Jake. The crux of their argument this time is the issue of socializing Jake by keeping him in daycare compared to concerns for his safety in the midst of the Reaper War. Simply supporting them to do whatever is best for their family will net you 2 Reputation points. If the assignment was completed in Mass Effect, Shepard will mention remembering the couple from their previous interaction.

Retrieved from "https://masseffect.fandom.com/wiki/Citadel:_Family_Matter?oldid=517020"
Community content is available under CC-BY-SA unless otherwise noted.