A forged ID has been located while assaulting Harkin's hideout in the Zakera Wards factory district. It may prove useful to someone.

The assignment is acquired and completed in one of two ways on the Citadel:

Regardless of how you get the assignment, you must finish Thane's loyalty mission first to complete it. Depending on whether you saved or abandoned the Council in Mass Effect, their dialogue changes but the assignment remains the same. 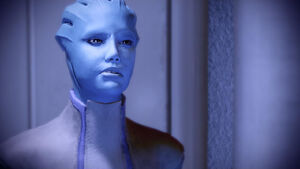 Talk to an asari named Kalara Tomi sitting on a couch with another asari in the transit corridor between the middle (Level 27) and west (Level 26) sections of the map. She complains of being flagged as a potential for geth infiltration, apparently for no reason.

At this point, you can resolve the assignment in a few ways, each with their own associated rewards:

Note that the Forged IDs are found during Garrus' loyalty mission at the C-sec warehouse. In the small room before the two big mechs with the shutters, you can obtain the Forged IDs. Even if the mission has already been completed, these IDs can still be obtained, although nothing can be done with them.