Chief Engineer Adams has requested a GX12 thermal pipe to make the Normandy's engines safer. Find one on the Citadel and deliver it to him.

Speak to Adams on the Normandy's engineering deck. After Priority: Sur'Kesh, however, Mordin Solus and Eve will occupy the med bay, and Adams and the medical officer will temporarily reside in the crew quarters. In this case, Adams will only return to his station and request to speak with you after you have completed any two missions involving landing on a world (Leviathan and Omega missions count toward this). 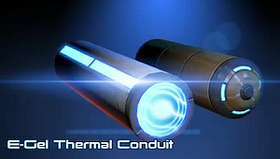 Head to the Citadel and purchase the E-Gel Thermal Conduit at the Elkoss Combine Arsenal Supplies kiosk located at the Bank in the Presidium Commons for 1,000 credits.

Alternately, if you have already previously visited the Elkoss Combine Arsenal Supplies kiosk, head to the Normandy's Shuttle Bay and access the Alliance Requisitions terminal. You can purchase the item with a 10% surcharge.

You will gain 5 Reputation and 375 experience. If Kenneth and Gabby are alive and were pardoned, schematics for Optimized Eezo Capacitors will be sent to the Crucible project.

Retrieved from "https://masseffect.fandom.com/wiki/Citadel:_GX12_Thermal_Pipe?oldid=514983"
Community content is available under CC-BY-SA unless otherwise noted.