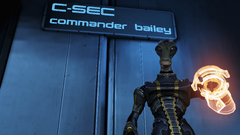 Salarian Spectre Jondum Bau suspects that a member of the hanar diplomatic staff is indoctrinated. Find evidence on the hanar in the Presidium Embassies.

You will receive an email from Agent Bau asking you to meet him on the Citadel.

He is standing outside Commander Bailey's office side the human embassy.

Note: This mission must be completed before completing Priority: Tuchanka as it will be the last opportunity for the player to visit the Citadel before Priority: The Citadel II, after which it will no longer be available.

This mission simply involves running around the Citadel. Refer to your ingame map of Citadel locations whenever you are lost. 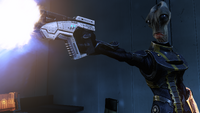 Talk to Bau about what is going on and he gives you an overview. Apparently, the Alliance raided a batarian science lab where the batarians were studying Reaper tech. It turned into a massacre and the Alliance got away with nothing. However, hanar operatives were there as well and Bau believes they were indoctrinated at that time. You can ask where Bau got the information, and the answer depends on whether you completed Kasumi: Stealing Memory or not.

If you did, he says it came from Kasumi Goto, regardless of her survival in the Suicide Mission. Otherwise, he claims to have paid off Donovan Hock for the intel.

The implicated hanar operatives are now members of the hanar diplomatic delegation. Bau has tracked several suspicious transmissions between Kahje and the Citadel. Shepard offers to look up inside the Spectre office. Bau says that he will appreciate that and as he leaves, he tells Shepard that not everyone ignored the Commander's warnings about the Reapers, and he hopes it isn't too late.

Shepard then enters the offices. If Kasumi is alive, she decloaks upon the door's closure and offers to help. If you helped her retrieve Keiji Okuda's graybox, she claims to have leaked its contents regardless of the prior decision to keep or destroy the device: if the graybox was destroyed, she claims enough clues were left to piece things together when she got curious to peek again. 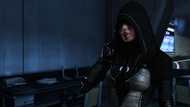 Bau maintains contact with you througout the mission through comms. If Kasumi is around, she also interjects from time to time without the salarian knowing about it. Go to the Spectre Terminal and select the Hanar Embassy Tracking option. Exit the terminal and Bau says that he is now checking security reports. Head over to the hanar embassy to track transfers coming from there.

If Kasumi is alive, she compliments Bau's plan and generally approves of the salarian despite his goal of arresting her. Otherwise, Bau shares his criteria of suspicious activity by ambassadorial staff.

The NavPoint is a terminal at the Office Suite. When you activate it, Shepard contacts Bau and reports strange money transfers from Bolohn and Oloon. Bau clears Bolohn, as his transfers are for his asari mistress, but he isn't sure about Oloon. Shepard offers to check Oloon's recent messages and personal records.

If Kasumi is around, she finds it odd that hanar have mistresses. Shepard attempts to lure her into saving the galaxy with promises of immunity from prosecution, but Kasumi doesn't bite. If Kasumi isn't around, Bau explains Bolohn's delicate political situation.

The next NavPoint is at Docks: Holding Area, right outside the elevator. When you access it, Shepard discovers Oloon's activities: heavy lobbying for the hanar to support the war effort. Bau says that it is clear that he isn't indoctrinated, and asks who's opposing him. Shepard reports an unnamed hanar, recently arrived from Kahje, and offers to check transit records. Head to the opposite side of the docking bays to continue.

If Kasumi is around, she references Shepard's predilection for hauling everyone into the war, citing Keiji's (destroyed, intact, or unrecovered) graybox as a factor for her non-involvement. Otherwise, Bau comments on the hanar species' "mild" xenophobia.

Access the terminal on the far end of the Docks Holding Area to contact Bau and Shepard forwards him a list of new hanar arrivals. Bau deems the list useless as it is all face names, while the ones from the Alliance raid are soul names. Bau says that soul names aren't public and asks Shepard to tap back into their communications.

If Kasumi is around, she asks about the rest of the gang, specifically Jacob. Otherwise, Bau feels his suspicions on indoctrinated hanar were correct.

Head back to the terminal at the elevator. Accessing the terminal has Shepard contact Bau again and forward him the hanar communications. Bau says he's got it, a recent arrival named Zymandis. He was with the Alliance team that massacred the batarians and has been in a "special research assignment" ever since.

Head back to the Embassies. Once at the Embassies, head to the office suite on the left side of the elevator where Bau will meet you. Select Bau to continue. 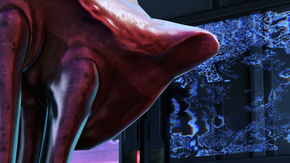 Bau and Shepard (joined by a cloaked Kasumi if she's around) head into the office to apprehend Zymandis. You can ask the hanar about his motivations or just go straight to the business of arresting him, but it is clear he has been indoctrinated. Depending on your choice, Shepard may call him a "big stupid jellyfish" to his "face".

Zymandis says that the defenses for the hanar homeworld are largely automated, and can be shut down by a single virus, which he has just uploaded. Bau quickly springs into action and attempts to stop the upload, but a human standing at the door quickly puts his hands around Bau's throat. Bau attempts to throw him off.

If Kasumi is alive, she runs up to the terminal to stop the upload. Shepard knocks out the man holding Bau and Kasumi manages to stop the upload, while Bau pulls out his gun and shoots the hanar. She then notices that the hanar has rigged a failsafe. The console explodes and knocks Kasumi against a wall, who disappears beneath her cloak. 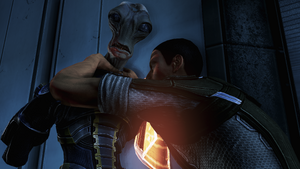 If you did Kasumi's loyalty mission, she gets out of her cloak when Shepard "luckily guesses" her presence. She still won't be pressured into joining the fight, but the Commander convinces her of all the expensive tech lying around unguarded. If you didn't help her secure Keiji's graybox, she won't reappear after the explosion.

If Kasumi isn't around, you must choose between saving Bau (using a Renegade interrupt) or stopping the upload.

Saving Bau grants you the Spectre Unit War Asset, while stopping the upload grants you the Hanar and Drell Forces War Asset. Kasumi also lends you her support provided you secured her loyalty back in Mass Effect 2.

Since the Spectre Unit has a Military Strength of 40, while the Hanar and Drell Forces have a Military Strength of 50 which can be further upgraded to 58 if the player completes Citadel: Alien Medi-Gel Formula, players hoping to maximize War Assets without Kasumi around to enable them to save both assets are advised to save the Hanar and Drell Forces.

Many players across multiple platforms are finding that they are unable to interact with certain terminals at all, the second terminal being the most common issue.[1] It is unclear exactly what causes the bug although one possible cause is leaving the Citadel after the first terminal but before the second terminal. To resolve the issue, reload to previous save game prior to starting the mission. After reloading, focus solely on completing the mission before attempting any other missions.

There is a fix for the PC version to the above problem where you can't use some terminals. http://www.youtube.com/watch?v=Vt7RKxImfT8