A salarian on the Citadel needs new heating unit stabilizers. Find them and bring them to him in the Presidium Commons.

Alternative journal entry:
Advanced heating unit stabilizers have been recovered from Noveria. Find someone on the Citadel who can use them.

Overhear Sellea's comm conversation, where he worries about unstable weather conditions dangerous to his sister's colony's egg clutches. He is a salarian located in front of the C-Sec Outpost in the Presidium Commons.

Alternatively, the item and the journal entry can be acquired simultaneously during an offensive against Cerberus in Noveria. 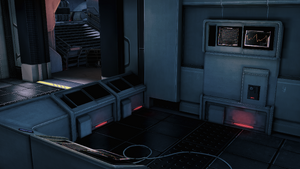 The heating unit stabilizers can be obtained during the mission N7: Cerberus Fighter Base, on the opposite wall, where the first objective is located, under the ceiling.

Alternatively if the mission is finished without finding them, they can be purchased from the Spectre Requisitions terminal for 1,000 credits.

The salarian colony of Senoquol is experiencing a power shortage that threatens their egg incubators. The colony will be forced to evacuate unless improved heating stabilizers can be found. The loss of a colony could amplify the difficulty of gaining salarian support for the war effort. Hanar heating stabilizer technology can be purchased for a nominal fee.

Once you have obtained them, hand it to Sellea. You will receive 5 Reputation, 30 experience, and 1,000 credits.

Note: This mission cannot be completed until after Priority: Tuchanka.