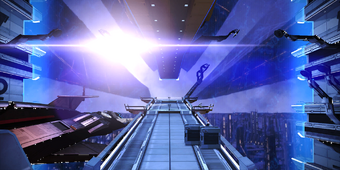 Lieutenant Girard has asked for your help with a suicidal girl who has barricaded herself in the docking bay. She was taken from the Mindoir colony by batarian slavers in the same raid that killed your family.

Lieutenant Girard asks for help with a girl who is on the docking bay. She is a survivor of Mindoir who was enslaved by batarians but escaped her captivity. She is severely traumatized; Girard is very concerned about her, and is afraid she will hurt herself. Knowing the Commander's background, he asks Shepard to help: if Shepard can get Talitha to take a sedative, Girard can take her to a psychiatric facility where she can be treated. Shepard can go and talk to Talitha about Mindoir and Shepard's own experiences, building up her trust to allow the Commander to get closer.

As Shepard talks and learns more about what happened to Talitha, there is the option to take a step toward her.

At any time, Shepard can choose to end the conversation and re-initiate it. In this way, all conversation options and dialogue choices can be safely explored. After speaking with her at least once, Shepard can also order Lieutenant Girard to have her shot (this will result in Renegade points and less XP).

If this assignment is accepted, leaving the Citadel before its completion will result in it auto-completing, leading to no rewards. Instead, a message appears in the Journal, reading, "While you were gone, Lt. Girard had to handle it himself."

If you convinced Talitha to take the sedative (the Paragon choice) she will send you the message entitled "Thanks." through your private terminal:

Retrieved from "https://masseffect.fandom.com/wiki/Citadel:_I_Remember_Me?oldid=474025"
Community content is available under CC-BY-SA unless otherwise noted.