Elijah Khan is dead, but intel may be recovered from his data drives. Speak to Brooks to find out what she and EDI have learned.

Back at the apartment, Shepard orders Brooks and EDI to check the drives for anything useful. Talk to your squadmates to pass the time. They are in the same locations as last time, only with EDI and Liara switched. Once you are ready, talk to Brooks to proceed. 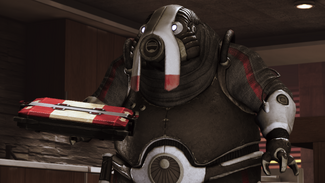 EDI and Brooks discover a communication a few days ago, and once Brooks cracks it, she opens the file. On it is a series of purchases, weapons, and big ones. Mechs are part of the included package. Glyph then interrupts to say that Shepard’s Spectre access code was just used at the Citadel Archives. Garrus explains the archives and what is contained there, very hush-hush information. Even he couldn’t get access as a member of C-Sec. As Shepard orders everyone to gear up, they find a volus with a pizza. James apparently got the munchies. Double Pepperoni.

Brooks then mentions that it is sad that you can’t bring everyone, but Shepard says why not? As everyone around the room voices their opinions, the volus also chimes in. Apparently someone needs to pay the bill.

Now you get to choose your squad for the upcoming mission; the rest will divide themselves into two support teams and come along as well. Remember to reconfigure your weapons setup as you'll only have the M-11 Suppressor from the last mission equipped on the selection screen.

Retrieved from "https://masseffect.fandom.com/wiki/Citadel:_Identity_Theft_II?oldid=466832"
Community content is available under CC-BY-SA unless otherwise noted.