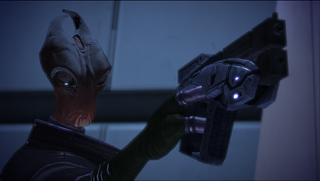 You met a volus scientist named Jahleed. He's in the C-Sec offices and refuses to leave for fear that his life is in danger. He claims that his colleague, a salarian named Chorban, is trying to kill him. The details are a bit vague.

Once given leeway to find irrefutable proof of Saren's treachery, the assignment is acquired simply by talking to Jahleed while wandering on the Citadel.

There are two paths to this assignment, depending on whether you have talked to Chorban already, and accepted the Citadel: Scan the Keepers assignment. Talking to Chorban first gives more insight on what the partners were doing.

Jahleed can be found in the C-Sec offices. From the elevator to the docking bay, head left, and he is in the small cove with the tree talking to a C-Sec Officer. Walk up to the volus and accept his assignment. He thinks his business associate Chorban is plotting to kill him, and wants you to meet with Chorban in the lower markets.

Chorban is in the Lower Markets, which can be accessed behind the Rapid Transit Station to Chora's Den, or the stairs near Conrad Verner from the assignment Citadel: The Fan. Chorban is in the corner, either with two other armed salarians or by himself. 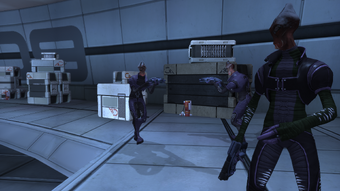 If you've already agreed to scan the keepers for Chorban, he explains that he was just going to threaten Jahleed in order to get the data from him. At this point, you can tell Chorban to stop, (Paragon) or you can help by continuing to scan for him (neither Paragon nor Renegade).

However, if you have never talked to Chorban, or if you have spoken with him in the Council Chambers but did not agree to do any scanning for him, he and his salarian bodyguards will attack you.

There are scattered explosive canisters in the immediate area. Chorban and his bodyguards may wander near one from time to time, so watch for the opportunity to take away sizeable chunks of their health. Beat all three enemies, not just Chorban, to advance the story.

After you defeat them, you have a choice - you can discourage Chorban from the cloak-and-dagger stuff he got himself into, kill him (for Renegade points), or agree to scan the keepers for him.

Regardless of how Chorban was dealt with, the journal entry for this assignment changes into Citadel: Jahleed's Secret and updates with a summary of Chorban's revelations.

When you return to Jahleed, he apologizes for lying to you, and then disappears to complete this assignment.

If you haven't accepted the assignment from Chorban, you have a few extra options. If you tell him you don't care about the data, you can turn him in to the C-Sec Officer for stealing from the workplace, Charm/Intimidate him (requires 7 charm/6 intimidate points) so he turns himself in to his company (for 8 Paragon/2 Renegade points), or ask him for payment. Asking him for payment gives you approximately five times the cash of a normal completion, but no Paragon/Renegade points. If you don't turn him in, he asks if you want to scan the keepers for him, leading you back to the Citadel: Scan the Keepers assignment (if not already finished).

Retrieved from "https://masseffect.fandom.com/wiki/Citadel:_Jahleed%27s_Fears?oldid=500688"
Community content is available under CC-BY-SA unless otherwise noted.