A down-on-his-luck lieutenant claims to know Shepard's mother and asks for money. 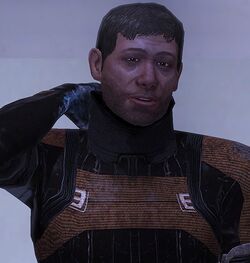 This assignment is only available if Commander Shepard has the Spacer background, and if the player has completed one of the core missions. While walking through the Wards Access corridor on the Citadel, Shepard is addressed by name as "that Shepard kid" by an older man standing nearby.

The man introduces himself as Lieutenant Zabaleta and claims to know Shepard's mother. He then asks Shepard for 20 credits because he's down on his luck—he's staying on the Citadel because he can't afford a ticket home. Shepard can give him the money or refuse. If you give him the money your Paragon score will increase by 2 points, with a similar Renegade reward if you refuse.

Shepard can then call the SSV Kilimanjaro (to which the Commander's mother is currently assigned) from the Normandy's comm room to confirm Zabaleta's story. Shepard's mother explains Zabaleta is suffering from post-traumatic stress disorder because he was at Mindoir, and says he should go to the Veterans' Affairs Office to get help.

Returning to Zabaleta, the lieutenant asks for money again, for whiskey to stop the dreams. Shepard can give him the money, set him up with an account at a grocery store to stop him from drinking, or simply refuse again. Shepard can also try to send Zabaleta to the VAO, but it takes Charm (4) or Intimidate (5) to convince him to go.

If the assignment is completed, Shepard's mother will send the Commander a message about the Lieutenant.