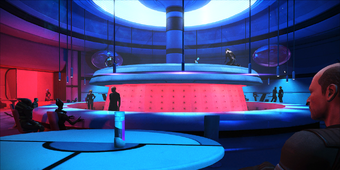 A man named Finch, from the gang you joined in your youth, has asked you to speak to a turian guard about getting a fellow gang member freed. The guard is down in Chora's Den.

Citadel: Old Friends is only available if Commander Shepard has the Earthborn background. After completing one or more of the main storyline missions (on Feros, Noveria or Therum) a human named Finch can be found outside Chora's Den in the Wards and will address Shepard in passing. 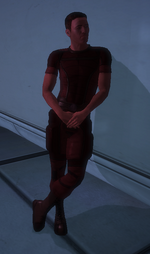 Talking to Finch will reveal that he is a member of the Tenth Street Reds, a gang on Earth to which Shepard once belonged. Another gang member, Curt Weisman, has been arrested by the turians for a "minor offence", although he was in turian space at the time. Finch wants you to talk to the turian guard in Chora's Den to secure Weisman's release. Finch also threatens to reveal Shepard's shady past with the Reds if you refuse.

You can then find the turian guard and discover that the Reds have become a violent anti-alien group. Weisman was responsible for a hate crime against the turians, namely poisoning medical cargo meant for a turian colony that could have caused the deaths of millions.

There are several routes you can take for morality point rewards: you can negotiate Weisman's release, inform the guard that Finch is likely to try and free his prisoner or change your mind after hearing about Weisman's crimes.

If you chose not to free Weisman, Finch will appear and declare that he is going to tell the galaxy that Shepard was once affiliated with the Reds and their anti-alien agenda. You must decide how to deal with him, either convince him to keep his mouth shut or simply shoot him. Your choice affects the turian guard's opinion of the first human Spectre either positively or negatively. Killing Finch impresses the guard, whereas talking Finch down and letting Finch go makes the guard think less of Shepard. 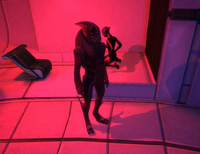 In Mass Effect 2, via the private terminal Shepard receives a message from Finch entitled "Hello from the Reds". Although aware of Shepard's discontent at Finch finding the Commander two years prior, he encourages Shepard for working against the Collectors.