Charles Saracino of the Terra Firma Party approached you on the Citadel, seeking support in the next election. You declined.

Alternative journal entry:
Charles Saracino of the Terra Firma Party approached you on the Citadel, seeking support in the next election. You said you would endorse him publically.

Charles Saracino can be found after Captain Anderson summons you to meet him at Flux. In the Upper Wards, near the stairs by Flux where the player first encounters Emily Wong (at the stairs leading up from the Upper Wards outside the sliding door facing the transit console), there will be a group of people standing around chanting slogans. Charles Saracino, who stands at the front of this group, will call you over for a conversation.

Unlike most assignments, the journal entry for this one is marked complete upon receipt, with the text reflecting your decision. 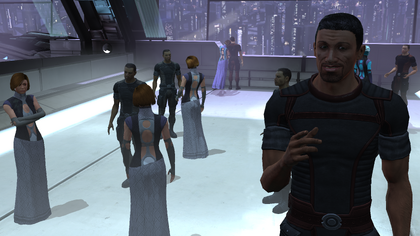 Charles Saracino is current leader of the Terra Firma party, and a vehement critic of the Alliance's policy toward alien races. He believes humanity should resist alien influences by any means necessary — even militarily in the worst case. Saracino is currently running for a political office in the Alliance Parliament and the support of the first human Spectre would be invaluable.

If Ashley is in your party, she will have some remarks of her own against Saracino. The player can either encourage or curtail Ashley's responses. Kaidan, Liara, Garrus, and Wrex also have their own complaints to make.

There is some information about Terra Firma, Shanxi and the First Contact War available through conversations with Saracino. When Saracino asks Shepard to endorse him for a seat in the Alliance parliament, Shepard can agree or refuse — possibly because it would not be prudent or out of a belief that humans need to cooperate with alien races. Even if the Commander refuses, Saracino asks if Shepard, as the first human Spectre, would mind making a statement of public support for his candidacy.

Retrieved from "https://masseffect.fandom.com/wiki/Citadel:_Our_Own_Worst_Enemy?oldid=509225"
Community content is available under CC-BY-SA unless otherwise noted.