1 of 3
You spoke with Rita, a waitress at Flux. She's concerned for her sister, who is working undercover for C-Sec. Rita thinks her sister, Jenna, is in over her head, but she can't convince her to stop.

Upon your first visit to Flux, you can overhear the volus manager Doran speaking with his employee Rita about her sister. Talk to Rita to learn the details of her problem. 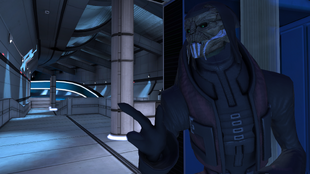 Head to Chora's Den and speak to Jenna at the bar. All dialogue is linear and the same, and results in Jenna being irritated by everyone's concern and refusal to stop working for C-Sec. After she cuts off the conversation, she won't speak to you further.

When leaving Chora's Den, a turian will bump into you and whispers that if you're concerned about Jenna's safety, to see him at C-Sec. When questioned, the turian acts drunk to deflect suspicion and stumbles off.

Head to C-Sec and move towards the traffic control area. You'll find the turian in one of the offices on your left. He introduces himself as Chellick, a C-Sec detective, and berates you for almost blowing Jenna's cover. He explains that Jenna is working in Chora's Den to collect information about illegal weapons mods.

You may Charm or Intimidate Chellick to force him to release Jenna immediately. Additionally, you may gain Chellick's favour: he advises Shepard of an opportunity involving an arms dealer that would close her case, so there will be no need for her to work in the Den. If you lack the requisite points in either alignment, you have no choice but to decline or agree to the quid pro quo. 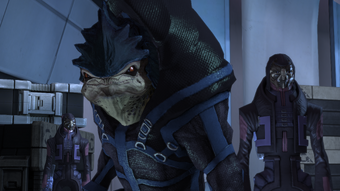 If you choose to decline initially, the offer to help remains open when you talk to Chellick again.

The arms dealer is a krogan, named Jax, and can be found in the Lower Markets near Morlan's famous shop. At the meeting, you can either try to arrest Jax, kill him outright, or keep up the act and purchase the weapon mods peacefully.

Choosing to arrest or wilfully fight Jax results in a fight and 9 Renegade points when you report back to Chellick.

If you play along and just give Jax his money, Chellick logs the transaction as evidence and gives you these rewards when you report back: 8 Paragon points, an upgrade, XP, credits, and omni-gel.

Any of these resolutions leads to Jenna being removed from Chora's Den and going back to work at Flux. Speak to Rita to end the assignment. She is pleased that her sister is out of danger, but slightly annoyed: she forgot that Jenna gets all the good tips.

As with most assignments, morality points are available during key sequences.

Retrieved from "https://masseffect.fandom.com/wiki/Citadel:_Rita%27s_Sister?oldid=516529"
Community content is available under CC-BY-SA unless otherwise noted.