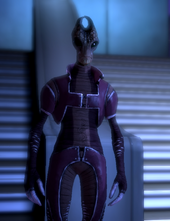 A quirky salarian named Schells was thrown out of Flux for cheating at the gambling machines. He says he wasn't actually cheating. He was just gathering data to create a cheating system. What could be wrong with that?

After starting the Rita's Sister assignment, the next time you enter Flux a cutscene plays showing Schells being thrown out by the club's bouncer. Schells explains that he is trying to perfect his "system" for predicting the outcomes of Quasar machines. In order to do this, he has been using a device which emits a signal that tampers with the machines, increasing his odds of winning (as Schells needs more data on winning instead of losing). Not surprisingly, Flux's owner Doran accused him of cheating and tossed him out.

Schells will attempt to enlist your help with collecting the data; if you refuse, he'll stay at the entrance to Flux until you agree to help him out. 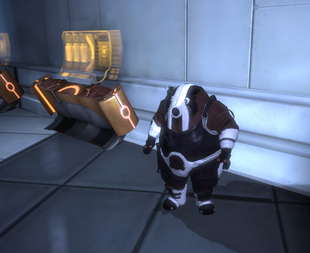 Once Schells gives you the device, you have three choices.

If you want to help Schells, play Quasar until you win 5 times and the device alerts you that enough data has been gathered. You can then return the device to Schells for credits and an XP reward. There are no morality rewards.

Doran is in the casino watching you: if you get greedy and keep playing, once you get 7 wins Doran will come up to you, confiscate Schells' device, take all the credits you have won and ask you to leave the bar. You can return to Schells and tell him the news, ending the assignment with no credit or XP reward.

Give the device to Doran Edit

Alternatively, you can give the device to Doran. (You can give the device to Doran even after you've used it to collect wins for Schells.) If you give him the device, you receive an XP reward and Doran gives you some credits to "play a few rounds of Quasar on the house". Of course, you don't have to play the games and can just walk away with the money. The XP and credit amounts are the same as if you had given Schells his data instead. Again, there are no morality rewards for turning the device over to Doran or for choosing to keep the credits instead of playing Quasar. 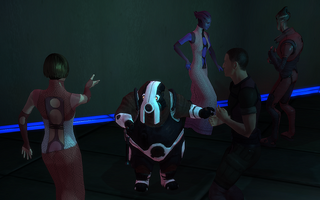 If you return to Flux after this assignment is complete, you will see Doran dancing on the club floor; you can highlight him and activate to do a little dancing of your own. If your love interest is in the party, speak to him or her a few times on the dance floor, and he or she will dance with you.

Retrieved from "https://masseffect.fandom.com/wiki/Citadel:_Schells_the_Gambler?oldid=513093"
Community content is available under CC-BY-SA unless otherwise noted.