You have discovered a signal being used to funnel money from gambling machines to a private account. If you can trace the system, you can find out where the money is going, and why.

Upon examining a Quasar machine at the back of Flux labeled "Suspicious Gambling Machine", a member of Shepard's squad will comment that someone has rigged the machine to funnel credits through the system. They will offer to trace the signal. 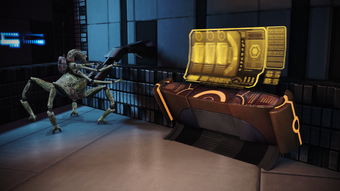 The signal is being bounced throughout the Citadel over a series of relays. The relay locations are given in the Journal entries and are marked on the map.

Examining the end point begins a conversation with the "thief", which is actually an AI residing in the terminal. Having been discovered, it prepares a self-destruct mechanism. Under Shepard's questioning, this AI explains its origins. A would-be thief created a simple AI to help him steal from the Quasar machines. Unknown to the thief, his AI made another, the AI now addressing Shepard, before the thief discovered the "malfunction" and destroyed his creation. 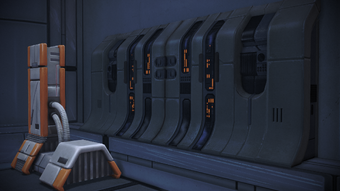 The surviving AI retaliated by falsifying the thief's financial records, and got him arrested by the turians. It then continued the credit-funnelling operation, intending to get itself installed in a starship so it could make contact with the geth. However, now that it has been discovered, the AI is planning to destroy itself and take Shepard with it. The AI is scornful of organics like Shepard, claiming it is not naive; it understands organic life must always enslave or destroy synthetics, but it refuses to die alone.

At the end of the conversation the AI begins arming its self destruct and siphoning the credits. Shepard only has a brief window of time to prevent a massive explosion on the Presidium. There are two options to stop the AI: