A C-Sec officer needs target-jamming technology to save lives during future attacks. Find the technology and bring it to him in the Presidium Commons.

Eavesdrop on the conversation that the turian C-Sec Officer is having over his comm unit next to Apollo’s Cafe in the Presidium Commons. 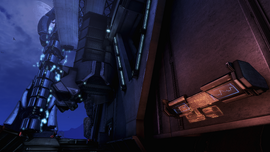 While exploring the AA Gun Control facility during Rannoch: Admiral Koris, look for the Jamming Tower Data at the terminal on the right side wall of the left AA Gun setup.

If the data was missed during the mission, it can be also be purchased for 1,000 credits, before discounts or remote access markups, at the Spectre Requisitions terminal.

An Eclipse covert ops team is willing to sell jamming technology they recovered from a geth station. Deploying these jamming units on the Presidium could hinder enemy forces in the case of another attack on the Citadel, thereby saving civilian lives. Because the Alliance cannot formally support Eclipse mercenary work, this technology should be treated as though it were discovered during action on Rannoch.

Once acquired, deliver it to the C-Sec Officer. Completing this mission gives you 5 Reputation, 30 experience and 1,000 credits. It also updates the Citadel Defense Force War Asset.

Retrieved from "https://masseffect.fandom.com/wiki/Citadel:_Target_Jamming_Technology?oldid=470630"
Community content is available under CC-BY-SA unless otherwise noted.