While they were never completely supportive before, it may still be worth contacting the Council and informing them of recent events.

Shepard automatically gets the mission upon completion of the Freedom's Progress mission and access to the new Normandy.

When Shepard takes command of the new Normandy, there will be a message from Shepard's former commanding officer, David Anderson.

If Shepard saved the Council, the message is:

If Shepard did not save the Council, the message is:

Go to the Citadel. Use a Rapid Transit terminal to travel to the Presidium. Shepard will be met at the human embassy by Anderson. 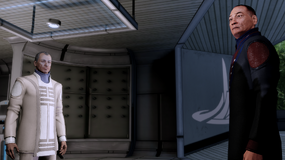 Retrieved from "https://masseffect.fandom.com/wiki/Citadel:_The_Council?oldid=461572"
Community content is available under CC-BY-SA unless otherwise noted.