You agreed to be interviewed by a reporter. Hopefully you came off well.

After completing a key mission world (Therum, Noveria or Feros) and returning to the Citadel, Shepard will be confronted by a reporter named Khalisah Al-Jilani outside the C-Sec Academy lift down from the docking bay. Al-Jilani introduces herself as a Westerlund News reporter who wants to give people back home a sense of how Shepard will represent them as a Spectre. 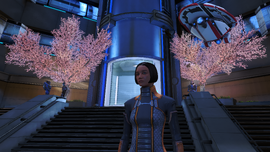 If Shepard agrees, Al-Jilani asks leading questions about Shepard's Spectre status, the SSV Normandy, and whether the Citadel Council's interests conflict with those of the Alliance. You can answer each question or simply tell her to buzz off. Using Charm or Intimidate responses tend to give Shepard the upper hand in the interview. One Renegade response even involves Shepard punching Al-Jilani. Alternatively, Shepard can realise Al-Jilani has an agenda—portraying Shepard as a "shill for the Council"—and can simply walk away.

Later aboard the Normandy, a transmission will come through from Admiral Hackett at the Fifth Fleet, either praising or reprimanding Shepard for the commander's conduct in the interview, depending on the player's choices. If Shepard told Al-Jilani that Saren Arterius was behind the Eden Prime attack, Hackett reports that this caused a minor diplomatic stir with the Council (they've been trying to downplay any Spectre involvement in Eden Prime) but tells Shepard not to worry about it, the Council's always angry with the Alliance anyway.

A news report in the Citadel elevator later on also gives the media's response to Shepard's interview.

Note: If you complete Noveria and speak to Al-Jilani before doing any of the other main worlds, it turns out news of the events at Peak 15 has already got back to the Citadel, but stonewalling from Binary Helix means the reports are confused, only mentioning a lab accident and how the events have been handled by Administrator Anoleis. Al-Jilani, knowing Shepard has just returned from Noveria, asks directly if the Council ordered Shepard to sabotage the labs at Peak 15.

Note: If you killed the colonists on Feros, instead of incapacitating them, and speak to Al-Jilani before doing any of the other main worlds, you will hear the news that ExoGeni is shutting down the colony when taking the elevator down to the C-Sec Academy. In the interview Al-Jilani asks Shepard about the reason for the colony's destruction.

If you complete this assignment, Khalisah will be waiting in the corner of the 28th floor of the Zakera Ward, next to the Dark Star lounge. This time, however, Shepard is much wiser about her goals. This offers easy xp and Paragon/Renegade points. She'll comment on you punching her the last time if you decided to do so. If Shepard punches Khalisah the second time around, but not the first, Shepard will say that s/he should have done that the first time.

If you complete the assignment from Mass Effect 2, Khalisah will be in front of the elevator in the Citadel Embassies. This final time has her ready for Shepard (if you chose to hit her in the past game). If taking on the Renegade interrupt, she will block your attack having you do it again. Taking the next option will knock her down with Shepard commenting how they're upset about the situation and means well after the attacks on Earth and commands her to stay down. If not taken, she will hit Shepard and leave after remarking she has no more questions. If skipped, Shepard will comment how they're doing their best where Khalisah will continue to ask questions regarding the attacks. Shepard will then be given a Paragon interrupt. If taken, Shepard will ask her for her help to keep asking the hard questions, to not let the council forget about Earth, and states that the Alliance is doing everything they can to help. In response, Khalisah encourages the galaxy to stand together, contributing to the war effort; if Shepard never punched her in the previous games, her sincerity provokes greater support. If no options are taken upon, Shepard will mark how they have better things to do. None of the options give XP nor Moral Points.

Retrieved from "https://masseffect.fandom.com/wiki/Citadel:_The_Fourth_Estate?oldid=513061"
Community content is available under CC-BY-SA unless otherwise noted.