A message from Primarch Victus implicates volus ambassador Din Korlack as a possible Cerberus informant. Investigate the ambassador at the Presidium Embassies.

After stopping the Cerberus coup, Shepard receives an email from Primarch Victus containing this assignment.

First, go to the Citadel Embassies floor and go to the Spectre room. Use the Spectre Terminal to receive a location on Din Korlack. 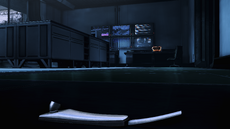 Then, talk to the turian guard who's at the Office Suite in the Citadel Embassies. Save, then talk to him again. He will let you into the office. There's a terminal in the office containing audio recordings of previous events, hear them out. They're evidence of Korlack's collusion with Cerberus and his severance of ties. If you imported from Mass Effect 2 with Zaeed Massani alive, be surprised to hear his gentlemanly tones.

Once you have listened to all three recordings, on the opposite side of the room you will find an earpiece with a link to Korlack. There will be a cutscene and then you will end up at the Presidium Commons. You ask the ambassador for his location, who slyly namedrops "Selkish Arms" within his captors' hearing. Head to either Apartment 80 or 94, the ones at the far ends of the hall. Whichever you try first will be the wrong door, and this begins a short timed section of the mission. Hustle to the opposite door without pausing. Note: If you can’t open the second door, reload a previous save and try again, moving more quickly between the first door and the second door.

On opening the right door you'll find Korlack being guarded - by whom, it depends on the following conditions: 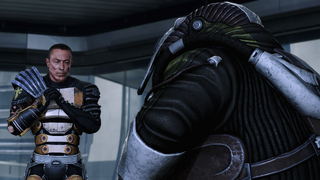 After the cutscene, there will be a choice between saving the colony or gaining the Volus Bombing Fleet as War Assets. If you received Zaeed's loyalty, you can choose a Paragon or Renegade option that gets you both.

If you can only have one or the other, to maximize your war assets get the bombing fleet for a net shift of 65 points. The bombing fleet is worth 75, and the Turian Sixth Fleet will lose 10 points from this decision.

Upon completion you will gain 210 experience, 5,000 credits, and morality points depending on your conversation choice. If Zaeed made it out alive, you will be able to find him in the refugee camp and recruit him as a War Asset. If you chose the bombers over Korlack's intel, a news report concerning the unrevealed Cerberus target will pop up in the email inbox after the mission.

Retrieved from "https://masseffect.fandom.com/wiki/Citadel:_Volus_Ambassador?oldid=465024"
Community content is available under CC-BY-SA unless otherwise noted.