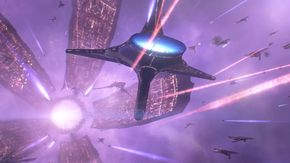 The Citadel Fleet is the main space defense force of the Citadel. The flagship of the fleet is the asari dreadnought Destiny Ascension, the most powerful ship of the Council races. The Citadel Fleet consists of a mixed group of turian, salarian, and asari vessels, though the greater number of them are turian, due to the turians' peacekeeping role.

The exact number of ships in the Council's fleet is unknown, but there were enough vessels to patrol every mass relay linking Citadel space to the Terminus Systems and still leave a force stationed to protect the Citadel. Ambassador Udina claimed that the Citadel Fleet was large enough to secure the entire Attican Traverse if the Council wished.

Battle of the Citadel

In the aftermath of the battle on Virmire, the Council deployed its fleet to every relay in Citadel space, believing that Saren Arterius wouldn't dare attack the Citadel directly. This strategy proved to be ineffective when the massive dreadnought Sovereign and a fleet of geth warships launched a surprise attack against the Citadel. During the attack, the Destiny Ascension ordered Citadel control to close the station's Wards, transforming it into an impenetrable fortress. Unfortunately, Saren had already used the Conduit to infiltrate the Citadel and shut down both the Citadel and the mass relay network, subjecting the diminished Citadel Fleet to the full force of the geth attack and preventing any reinforcements from arriving. Sovereign then broke through the fleet as the Citadel's Wards closed behind it.

The Citadel Council was evacuated to the Destiny Ascension, but the ship was unable to fight her way through the hordes of geth ships accompanying Sovereign. Commander Shepard eventually reactivated the mass relays, allowing the Alliance Navy and the Normandy to aid what was left of the Citadel Fleet. It was then up to Shepard to decide whether to have the reinforcements save the Council and the Destiny Ascension, or to let them die while they waited for the Ward arms to reopen.

If Shepard chose to save the Council, the flagship Destiny Ascension survives. It is not known how much of the rest of the fleet survived, although the turians lose 20 cruisers, each with a crew of 300. The Galactic News in 2185 mentions that the Destiny Ascension itself goes on to make a 20-colony victory cruise. The Alliance military loses eight cruisers and 2400 crew members by saving the Ascension.

If Shepard chose to let the Council die, it is implied that most of the fleet defending the Citadel was destroyed. According to Khalisah al-Jilani, 10,000 people perished because of this action, although it is unknown if the numbers are exaggerated. In 2185 the Galactic News reports plans for an Allied Citadel Defense Unit which will presumably replace the destroyed Citadel Fleet. The Systems Alliance provides the majority of ships for the Unit, while the Asari Republics have ceded their responsibility for defense to the Turian Hierarchy. As a result of the Council's death and the destruction of the Destiny Ascension, the Turian Hierarchy announces that it will not limit its dreadnought production to previous totals, citing the need for increased security.