Citadel Security Services, or C-Sec, handles law enforcement on the Citadel. It is a volunteer police service answering to the Citadel Council, and is headed by an Executor, who often liaises between C-Sec and the Council.

The chief of operations is the Executor, whose incumbent is a turian, Venari Pallin, whose office is located within the Presidium Embassies, near the Citadel Tower. The C-Sec Academy itself is located in the Lower Wards, partly due to the crime levels in the area compared to the rest of the station.

Befitting their "public service" culture, it was the turians who first proposed creating a police force for the Citadel, which may be why more than half of all C-Sec officers are turian. Humans appear to form the largest minority, with at least 116 officers in the Zakera ward as of 2185, followed by salarians and asari. The 200,000 constables of C-Sec are responsible for maintaining public order in the densely populated Citadel, as well as providing pirate suppression, customs enforcement, and search-and-rescue throughout the Citadel and surrounding space. 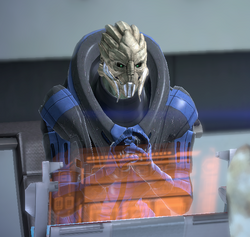 Joining C-Sec is prestigious; applicants must be sponsored by a Citadel Councilor or the ambassador of an associate Council race. Generally, applicants have many years of distinguished service in the military or police forces of their respective race, but an inexperienced applicant with demonstrable talent will be fairly considered. Most rookies are posted to the comparatively-calm Presidium to get some operational experience and familiarity with protocol before being assigned to the Wards.

While C-Sec enjoys a long and respected history with the Council itself, C-Sec and the Council's Spectres are often at odds. Many C-Sec members, notably Executor Pallin, believe that allowing Spectres to be "above the law" is a dangerous practice. In turn, the Spectres are aggravated when C-Sec's dedication to procedure and due process hampers their investigations.

Many of C-Sec's own officers—usually detectives like Garrus and Harkin—occasionally find themselves at odds with C-Sec's strict regulations, likely in place to keep order among so many different races and factions aboard the Citadel. As Harkin discovered, C-Sec is not above keeping files on its officers if the Executor feels disciplinary action may be warranted.

In 2183, after the attack on Eden Prime, the Council charged C-Sec to look into Saren Arterius and the Alliance's charge of treason. Finding no evidence to support the matter, the officer in charge, Garrus Vakarian, still wanted to pursue the issue, until being told by Pallin to drop the case. Garrus, however, continued to investigate which eventually led to the Med Clinic in the Wards. Here, Garrus ambushed a group of thugs and saved Dr. Chloe Michel's life, with the assistance of Commander Shepard. Dr. Michel offered her thanks and told them about the quarian who came to see her, Tali'Zorah nar Rayya. Garrus then asked to join Shepard's team.

C-Sec had also pulled aside a krogan named Urdnot Wrex, who was reported by Fist for making threats. C-Sec brought him to the C-Sec Academy "for a friendly chat." Shepard has the option to have Wrex assist during the Commander's investigation.

Sometime prior to 2183, galactic tension is rising due to batarian ambassador Jath'Amon's arrangement of a meeting with the Citadel Council, with the intention of negotiating a peace between the batarians and the Alliance.

At this time, Jacob Taylor is tasked to discover a terrorist threat endangering the Council itself. His investigation eventually leads him to the Citadel in order to warn the council about Jath'Amon's real intention. There, Jacob is stopped by a C-Sec officer, who is exposed as a batarian, revealing the terrorists have infiltrated Citadel Security itself.

C-Sec undergoes radical restructuring between Saren's attack on the Citadel in 2183 and 2185. In the aftermath of the decimation, humans now occupy many of the positions that were vacated due to casualties inflicted by Saren's armada.

Under the authority of Executor Pallin, C-Sec tightened security to reduce the possibility of geth infiltration, instituting "no-fly" lists, prohibiting weapons and bio-amps, and even barring individuals from traveling in certain circumstances, no matter how unlikely the suspect.

In 2186, Councilor Udina asks Captain Bailey to investigate Pallin, who has been seen coming and going from an office in his district. After arriving at the office, to find two dead C-Sec officers, and Pallin himself. Bailey tells Pallin about Udina's accusations, Pallin tells Bailey that Udina can't be trusted. Bailey says that Udina said the same thing, which Pallin counters by saying that they are all lies. Pallin then pulls out his gun and shoots at Bailey, who returns fire and hits Pallin in the chest. Pallin then charges Bailey, saying that he and Udina won't get away with what they are doing. Pallin knocks Bailey to the floor, but Bailey shoots and kills Pallin. Later in Udina's office, Udina congratulates Bailey on a job well done. Bailey explains his misgivings about the assignment, but Udina dismisses them and then promotes Bailey to Commander and tells him the Council will be expecting a full report of the incident.

During the Reaper invasion C-Sec is stretched to its limits. Officers are tasked to deal with the massive influx of refugees. C-Sec is forced to make many decisions to handle the crises on the Citadel. Civilian transports may be turned away due to the overcrowded docks. C-Sec may limit its efforts enforcing minor infractions in order to deal with the more urgent crimes. Due to increased demand for high-grade weaponry, C-Sec may also turn to the black market.

The Cerberus surprise attack on the Citadel catches the organization off guard. C-Sec headquarters is one of the first targets hit. When fights break out across the Citadel, officers are left without communication leading to a disorganized response to the invasion. With the timely intervention of Commander Shepard and the crew of the Normandy, Commander Bailey retakes control of C-Sec headquarters and organizes a response to the attack.

The invasion has caused additional strain to the organization. C-sec must disable many automated turrets and booby traps left behind by Cerberus while cleaning through the wreckage of the station. A civilian militia may be organized to help to deal with the manpower shortages in the organization.

Retrieved from "https://masseffect.fandom.com/wiki/Citadel_Security_Services?oldid=525537"
Community content is available under CC-BY-SA unless otherwise noted.