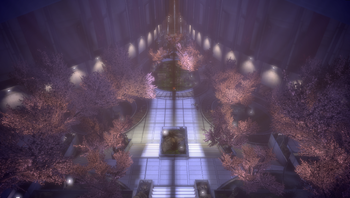 The Citadel Tower is at the epicenter of the massive Citadel. Rising parallel to the station's Wards, the Tower is the most distinctive monument on the Citadel and is home to the Council. From here, all Council decisions are made, decisions that shape the galaxy and the beings within its space.

The Citadel Tower is accessed either from an elevator on the Presidium, near the Relay Monument, or from any Citadel Rapid Transit location.

The Tower is home to the Council Chambers, which are full of trees and beautiful fountains. Sets of stairs in the anterooms lead up to the Council's audience chamber. In Mass Effect: Revelation, this area was called the Petitioner's Stage. Beneath the stage is a garden protected by glass.

Many people are found in the Chambers, such as politicians or individuals trying to petition the Council (like Rear Admiral Kahoku). Commander Shepard can listen in on conversations between a salarian and a turian concerning the rumours of Saren Arterius' involvement in Eden Prime, and about the chances of the volus getting a Council seat (which are next to none, according to the salarian).

According to Avina, the keepers make frequent appearances in the Tower and the Council Chambers, though they seem to simply be passing through on their way somewhere else.

The Tower is not solely an edifice; it is somehow used to manually open the Citadel relay leading to dark space. When Sovereign attacked the station, it settled on the Tower and extruded cables into it.

The Council Chambers were the scene of the final battle between Shepard and Saren during the Citadel incursion. Pursuing Saren to the station's master control unit, which turned out to be in the Council's audience chamber, Shepard saw Saren die and fall through the glass into the garden below. Saren's transformation into Sovereign's 'avatar' caused the stage to collapse and the squad battled the creature in the garden until it was finally destroyed.

When Sovereign was destroyed by the Alliance and what remained of the Citadel Fleet, a large piece of debris crashed directly into the Tower. Shepard's team was almost buried by rubble and the commander was nearly crushed under it, but they were found by a rescue team led by Captain Anderson.