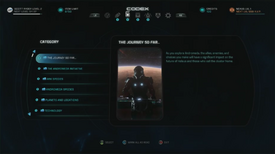 The Codex is the focal point for background information within Mass Effect: Andromeda and written from SAM's point-of-view.

The Codex in Mass Effect: Andromeda works similarly to the way it did in the previous games, with some distinct differences. It contains specific information in regards to discoveries or character progression. Some items are appended with new information learned as a result of plot progression, and there are some entries that change depending on choices taken within the game itself (as opposed to entries in the original trilogy dependent on choices made in the preceding game). In Mass Effect 3, the Codex was combined into the journal. In Mass Effect: Andromeda, the Codex is once again separated.

Please note: These entries are quoted verbatim from the game and should be kept pristine. Edits and non-codex updates should be placed on non-Codex pages relating to the same subject (e.g. don't update the Nomad's Codex article, update the ND1 Nomad article instead). If a codex entry changes as a result of choices taken, subheaders for all choices should be made to account for the changed text. Other static information should be added to their corresponding article.