watch 02:45
The Loop (Games)
Do you like this video?
Play Sound
This article or section is a stub. You can help Mass Effect Wiki by expanding it.

The Collective are an Outlaw faction primarily operating in Kadara. They are led by an entity known only as the Charlatan, and they've emerged as a power rivaling the dominant Outcasts faction for control of Kadara Port.

The Collective operate from the shadows and prefer to make problems disappear compared to the Outcasts' way of visible intimidation. Within the organization, orders from the Charlatan are relayed to secondaries for dissemination into the rank and file; only a handful are trusted with the Charlatan's true identity.

The Collective make it a point to know everyone worth knowing in Heleus. If the Charlatan deems someone with potential worth recruiting they reach out through representatives. These representatives pose as the organization's leader, and depending on the individual they're accepted on the spot or subject to further tests. The recruits often find out that they're actually just interfacing with Collective underlings and they've taken to calling them "Charlatans", thus the moniker has since come to refer to the actual leader/s of the Collective.

Representative-level agents tend to operate by codenames in lieu of their real names. The known ones use Earth constellations as aliases regardless of their race.

The Collective is known to make outreach efforts in both Kadara Port and the downtrodden population of Kadara Slums. One of their recruiters hangs out in Kralla's Song, and in the slums they have a soup kitchen publicly accredited to the Charlatan.

The Collective's main headquarters is located deep within one of the caves of Draullir. The Charlatan has decreed to its underlings that Pathfinder Ryder is not to be harmed, but lower level operatives in the badlands haven't heard of such orders due to the size of the organization. In the base, at least, the order is honored.

Due to the way the Charlatan operates, someone in the Collective has begun impersonating its leader for profit and influence. If Pathfinder Ryder properly reads the clues, the impersonator is revealed to be Dorado. 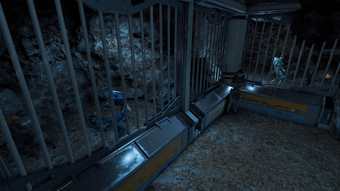 The Collective eventually make a move against Sloane by beating up her second in command Kaetus and challenging her to settle the score. On the caves of Draullir, the Charlatan reveals himself to Sloane as Reyes Vidal and challenges her to a duel, winner gets Kadara Port. Reyes stacked the odds in his favor and placed a Sharpshooter nearby with instructions to kill Sloane during the duel. Ryder spots the shooter, and decides whether to let Sloane keep her throne or let Reyes have a shot at it.

If Ryder saves Sloane, the Collective's bid for power is averted although Reyes manages to get away. Now that the Charlatan has been exposed, Sloane retaliates against known Collective supporters as the organization itself has gone to ground. If Ryder lets the shooter kill Sloane, the Collective seizes control of Kadara Port and forces the Outcasts to disperse. Reyes continues working from the shadows and installs Keema Dohrgun as his figurehead ruler in Outcast Headquarters. In light of Ryder's public show of allegiance, all Collective forces in the badlands henceforth leave Ryder alone.

Retrieved from "https://masseffect.fandom.com/wiki/Collective?oldid=527558"
Community content is available under CC-BY-SA unless otherwise noted.