The team has split again. One group is moving through an area infested with seeker swarms, using a team member's biotic abilities to hold the swarms at bay in order to reach a security door at the far end of the area. Another group is providing a diversion. 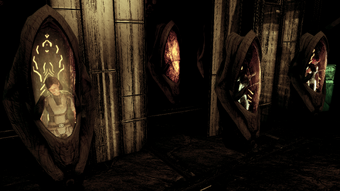 This mission starts just after you finish the previous mission. The room you enter has colonists and the Normandy crew. Shepard walks around and after wiping off condensation from a pod discovers one of two people:

The victim in the pod stirs and screams as she is liquefied. Though it is too late for her, Shepard directs the squad to open the remaining pods; depending on how speedily the Commander chose to depart for the Collector Base, either the whole crew is saved, half of the crew is saved or only Doctor Chakwas is saved.

Chakwas is either thankful or angry with Shepard, depending on how much of the crew is saved, and explains that the Collectors have been processing humans into a gray paste of genetic material. For reasons unknown to Chakwas, the Collectors send this human paste into tubes and route it to another part of the station. Shepard concludes that the tubes must be followed to reach the objective, but EDI informs you of an obstacle: the only route has too many seeker swarms for Mordin's countermeasures to work.

A biotic field is proposed to allow a small squad to get past. Miranda volunteers but the decision is yours.

Once the decision is made, EDI also points out that there is another path that can be used as a distraction. You must now choose a member to lead the second team.

Note: This means that Miranda will survive if selected as the fire team leader, even if she is not loyal.

Once both decisions are made, Chakwas asks about the crew and their route back. Shepard radios Joker to see if they can pick them up. He says that the crew will have to go backwards, which is not an option. You can choose an escort or not:

If you choose not to assign an escort, the crew won't survive the trip back. Once you make the decision, the screen fades to black and you regain control.

Now you have to select your squad for the mission ahead. You will be facing the usual roster of Collectors troops plus their huskified footsoldiers. The twist of this mission is you only have a limited area to maneuver because of the swarms held at bay by your specialist's biotic field, which may necessitate the need to configure your squad loadout for close- to mid-range combat.

As per usual, Warp is well worth having in here for its effectiveness against both barriers and armor. In particular, Samara (if you have her) has access to both Reave, which is effective against barriers and armor, and Throw/Pull, both of which instantly kill husks. Fire damage from Incinerate and similar powers is also recommended as a lot of the enemies who'll swarm you will have armor on difficulties higher than normal. Optionally, bring someone with Combat Drone to distract long-range enemies while you deal with the ones that make it inside your dome.

Warning: Kasumi's Shadow Strike ability will cause her to leap outside the protective bubble. If she is in your squad, it is suggested you turn squad power usage off during this mission.

Since you will have one more opportunity to change loadouts and get an Heavy Weapon ammo refill after this, an AoE weapon with no/short charge-up time is recommended, such as the Arc Projector or M-451 Firestorm. 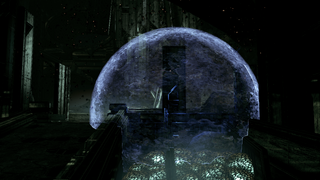 Note: Save often in this mission because of its difficulty.

The initial part of the mission is of the specialist telling you to go, and moving up until you reach a corner. SAVE here and select the specialist to move on. As you move into the room you see the swarms outside the bubble and hitting it on occasion. Do not go out of the bubble or you will take damage until you die. Same for your squadmates, however unless you order them they will not leave the bubble.

Be careful, as the bubble can obscure visibility, and the seekers beating against it doesn't help at all. Use your crosshairs and bring up the Power Wheel to "freeze" time and locate enemies if you are having trouble seeing.

Eventually you reach a point where you come under fire and the specialist takes cover because they cannot fight. Also take your team in cover and defend against the attacking Collectors. Harbinger makes an appearance and will be the only one to try to run up the ramp to flank you. Make sure he doesn’t because he will be able to wipe out you and your squad quickly. The Collectors will not keep coming, so when you take them out you're done. Save the game and select your specialist to move on. 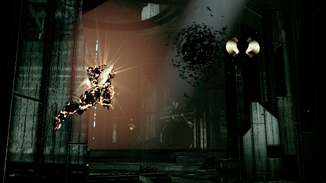 This walk is a short one because you will come under attack again. As the specialist moves toward the next stop, a few husks and abominations crawl up to charge the team. However, they appear at some distance, so it is possible to take them out at range. Several Collectors then fly overhead, with one being possessed by Harbinger mid-flight - this is a good opportunity to weaken and possibly take out a couple of the Collectors before they land. Abilities that send things flying around will cause opponents to crash land damaged, where they'll take some time to recover, giving Shepard and company time to either get into cover or fire on the disabled attackers.

The specialist takes cover on a docked platform behind a pillar while the Collectors land in preparation for their attack. As the platform occupies low ground and is protected by the biotic field, it can be used for cover.

Visibility can be particularly bad at this point, but an alternative is to simply eliminate Harbinger as he systematically possesses each Collector; his flaming body makes him easy to spot, and the fact that he doesn't take cover (and the lower ground you occupy, which negates his cover-breaking attack) makes it a turkey shoot.

Once you've dealt with the attackers, save because the next stop is the hardest. Prompt the specialist and move on. 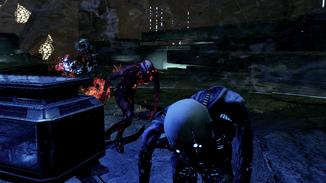 As you start to move out the specialist starts to struggle to maintain the field however they are still capable of moving. Eventually you come under attack again so take cover and watch out from the flanks and from the front. This time you are only attacked by husks, a scion and abominations. The husks and abominations swarm you and your squad, so focus on them first because of the danger they pose. Once the husks stop coming focus on the scion if you haven't taken it down already, and make it fall.

There is a short wall just opposite where your specialist takes cover that provides adequate cover to protect you from the Scion even if you lean out of cover. If you have the Arc Projector, simply pump bolt after bolt into the husks and abominations that swarm you until only the Scion is left, and then eliminate it before it gets close. Your heavy weapon ammo is restored when you begin the next part of the Suicide Mission, so don't be afraid to use as many bolts as it takes.

A Combat Drone, if available, will keep the Scion distracted for a very long time, preventing it from launching dangerous shockwaves at you while you take out the other enemies, so if you're an Engineer or brought an appropriately equipped squadmate, be sure to keep it active. Another option, if you have Zaeed installed, is to bring the M-451 Firestorm for this section. Have squadmates focus on the scion while you torch the husks, then use what's left to finish the scion.

When all the husks are put down, save (Note: this is the last opportunity to make a manual save for the rest of the Collector Base mission), select your specialist and move on. 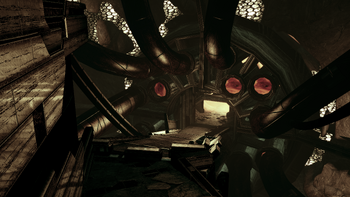 The specialist is now almost entirely exhausted, strained to their limits by maintaining the field. The specialist remarks that the squad needs to reach the end soon.

This next area offers little cover, and like the mission name suggests is nothing but a long walk. Be careful in this area: there are no Collectors, but you will have to face a few husks and abominations. They come up from the sides, so whip out the shotguns, if you can, and take them out before they can kill you.

Once the door is in sight, the specialist comments again that they need to reach it fast. Now it is a race, as the specialist is limp-running to the end. Once you leap over barriers in the middle of the ramp, a cutscene plays.

The squad races down the ramp and the door is opened by a squadmate who runs ahead:

The second squad radios that they are under heavy attack, then someone hacks the door to allow them in. Shepard covers them and as the leader enters they are shot, Shepard rushes to their side:

If you have only three members left in your party, any fireteam leader will survive - this is because you have to leave at least one to cover Shepard's squad.

Once the two teams regroup Joker reports on the status of whoever is escorting the crew back, then informs Shepard that the Collectors are massing outside the doors. Regardless of which option is chosen, Miranda says that the rest of the team will stay back to cover Shepard and a small squad.

Retrieved from "https://masseffect.fandom.com/wiki/Collector_Base:_The_Long_Walk?oldid=515025"
Community content is available under CC-BY-SA unless otherwise noted.