A Collector Cruiser is a massive vessel capable of carrying large numbers of Collectors, Husks, Abominations, Scions, Praetorians and Seeker Swarms along with enough stasis pods to capture every human colony in the Terminus Systems and still gather more from Earth. The Collectors are known to have possessed several cruisers, two of which are encountered in 2185. The Collector Cruiser is currently the only known Collector ship type. 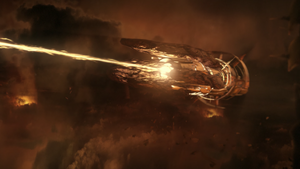 The ships are vast in size, easily dwarfing both the original Normandy and her larger successor. As is typical of Collector technology and design, the vessels are hybrids of organic protrusions with a metallic superstructure. The interiors consists of cave-like hallways, similar to an insect hive, and vast open areas traversed by floating hexagonal platforms. Despite their huge size, these ships are capable of landing on the surface of a planet (resting vertically), although they require an enormous thruster engine in order to take off quickly.

The cruisers are armed with a large particle beam weapon which is capable of multi-directional fire. The weapon is capable of firing either multiple shots in quick succession or a single devastating blast. Being a particle beam weapon, it ignores kinetic barriers, and it is powerful and accurate enough to critically damage an Alliance Navy frigate in only a few shots. The cruisers also appear to be equipped with sensors capable of detecting a vessel with a heat retaining stealth system (such as the Normandy). Details of this capability are never revealed. The Collector ships are equipped with an Identify Friend/Foe (IFF) system that allows them to traverse the Omega 4 Relay without harm.

In addition to forward-facing beam weapons, some cruisers are equipped with point-defense weapons shaped like "eyes" in its lateral sides. These weapons provide retaliatory fire for occasions where the ship is "upright", e.g. during a colony's harvest on the surface of a planet.

Despite being able to endure the atmospheric heat of reentry to land on planets, the Collector cruiser appears to be no more immune to sustained bombardment from Alliance anti-aircraft GARDIAN turrets than any other warship. This may just be a result of the laser-based weaponry also ignoring kinetic barriers (for an example of another warship brought down by relatively small arms fire, see the destruction of the SSV Iwo Jima). 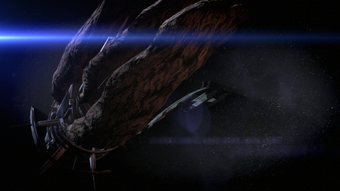 The Collectors used these ships to abduct the inhabitants of numerous human colonies. A single ship would approach quietly, disabling communications and sensors, land on a planet and unleash massive seeker swarms to paralyze the colonists. Collector Drones would then gather up the colonists, store them in pupae-like pods and transport them onto the cruiser, which would then leave the planet. For this it would need to use a more subtle form of propulsion, as its rocket engine would leave traces of which none have been found on any of the planets from which colonies were abducted.

Commander Shepard first encountered a cruiser when one ambushed the SSV Normandy shortly after the destruction of Sovereign. Initially mistaken for a geth warship, it was somehow able to detect the Normandy despite her stealth systems. The cruiser demonstrated its incredible firepower and easily disabled the Normandy with several precise blasts before circling around and destroying the crippled ship. While many of the crew evacuated, Shepard, Navigator Pressly, and twenty other crewmembers were killed in the attack.

The same cruiser was used in the Collector assault on Horizon. The resurrected Commander Shepard and the Normandy SR-2 crew used the colony's defense system to drive off the weakened ship. However, the ship had already captured approximately one-third of the colony's population, and the ship's afterburners destroyed several buildings and much of the surrounding land during lift-off. This indicates that the Collectors may use a more covert method of lifting when not in a hurry in order to maintain the absence of evidence with the attacks.

This cruiser was later found in a distant area of space, apparently deserted after reportedly being disabled by a turian patrol. Shepard's team investigated the dead ship and learned that the Collectors are in fact Protheans, upon analysis of a Collector corpse. Eventually, Shepard's team came into a massive circular room lined with millions of pods, suggesting the Collectors were intending to target Earth. However, when the team made it to a command console, the Collectors sprung their trap, having falsified the distress signal. Despite fierce resistance, the team was able to escape and gained valuable information from the ship's database, identifying the need for an IFF code to access the Omega 4 Relay. 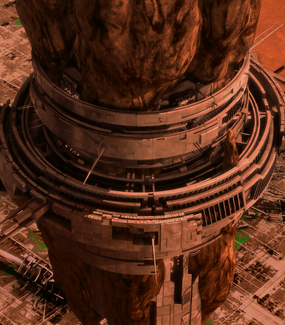 One cruiser lands on Fehl Prime in 2185, lured by a planted artifact of unknown origin and intending to harvest the planet's human population. This ship apparently carries an all-Collector complement, as no Husks or other similar creatures aside from Praetorians were sighted taking part in the operations. As per the usual Collector methods of abduction it releases its cargo of Seeker Swarms onto the unsuspecting populace first before sending in the drones and pods for collecting the paralyzed humans.

A token human resistance tries to take down the vessel using the colony's newly-installed defense cannon, although the beam is unable to penetrate the cruiser's barriers due to being fired at insufficient power. The beam is deflected and the vessel sends out retaliatory fire from an "eye", destroying the cannon.

Its eye defense systems targeted any spaceworthy vessels that humans might use to escape, although the humans soon manage to obtain another ship that enables them to infiltrate the cruiser. With collection of the colony complete, the vessel begins ascent into space but not before being intercepted by the humans' ship. This ship blasts its way into the cruiser's eye defenses to get in, and were it not for the fortuitous timing of the Collectors' inside man it would have reached and disabled the drive core of the cruiser.

Despite previously destroying any means of escape for the humans, the Collector cruiser contains a spaceworthy freighter that the humans soon use for their own escape. Soon enough, the cruiser's drive core actually gets disabled due to destruction of critical systems within the ship, and the cruiser begins to plummet back into the planet. With nothing to stop its descent, the cruiser crashes on top of the colony, killing everything aboard and ruining the planet further.

Retrieved from "https://masseffect.fandom.com/wiki/Collector_Cruiser?oldid=510818"
Community content is available under CC-BY-SA unless otherwise noted.