The General's physical appearance was quite different from the standard Collector, which has a humanoid shape. It had a more insectoid appearance, with a larger head, a short body, and multiple limbs, enabling it to operate numerous command interfaces. Its body strongly resembled the Praetorians deployed by the Collectors. The Collector General was a servant of the Reapers, specifically the one referred to as Harbinger, and was apparently directly controlled by Harbinger. The General could possess any normal Collector at any time, making them significantly more powerful and unlocking their biotic potential, making them a dangerous foe on the battlefield. This ability was taken advantage of by Harbinger while he possessed the General. The Collector General was always seen with glowing eyes, similar to what happened when he assumed control over an ordinary Collector.

Likely at the behest of Harbinger, the Collector General began to use intermediaries to make contacts in the seedy criminal underbelly of the Terminus Systems, offering lucrative technological rewards in exchange for live test subjects.

After Commander Shepard foiled Sovereign's attack on the Citadel, Harbinger developed an interest in humans. The General sought to acquire human biotics Gillian Grayson and Hendel Mitra, but this failed when its agent, the quarian exile Golo, was killed.

“ There is no problem with the arrangement. Half now, half when we have confirmed Shepard's identity ourselves!”

Failing to acquire Gillian Grayson prompted the General to accelerate its plans. It sent a warship to destroy the Normandy, killing Shepard and several crewmates. To acquire Commander Shepard's body, it subsequently consorted with the Shadow Broker, who had managed to retrieve it. The eventual exchange was made on the Broker's base on Alingon with the Broker's personal enforcer Tazzik. Everything was going well, until one of the Broker's agents, Feron, walked up to say that the Broker wanted full payment upfront. The General, controlling a Collector intermediary, refutes that it will pay half now and the other half when they've confirmed Shepard's identity personally. However, Tazzik was willing to believe Feron. At that moment, the Collector General, speaking personally with the Broker, accused him of betrayal. The Broker defended that Feron wasn't speaking for him and with his communications disabled on Alingon, he could not inform Tazzik otherwise. The General, displaying its greater omnipresence, revealed through its drone that Feron was a traitor. However, Liara T'Soni, who was working with Feron, was able to escape with Shepard's body, taking it far from Collector hands.

“I am assuming direct control.”

After failing to acquire Shepard's body, the General attacked several human colonies in the Terminus systems, and began using the genetic material from survivors to create a Human-Reaper hybrid. This gained the attention of Cerberus and a resurrected Shepard, who the General sought to acquire alive if possible. 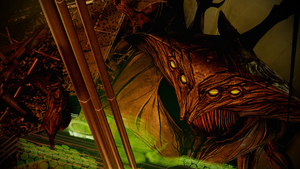 Commander Shepard and a team of specialists launched an assault on the Collector base. The General rallied every available Collector drone to protect the base, and possessed multiple drones during the battle, but the tactics used by Shepard's fire team caused it to spread itself too thin. Shortly before the sabotaged base met its end, Harbinger, after berating the General for its failure and asserting the Reapers "will find another way", released its control over the Collector General, whose eyes lost their glow for the first time, suggesting that it was always under Harbinger's control. In the final seconds after being released, the Collector General appeared to be confused or dismayed at being abandoned, suggesting some level of intelligence and emotional capability remained. The General is then killed when Shepard either destroys the Collector Base or activates a timed radiation pulse, killing all remaining Collectors on the base.

Retrieved from "https://masseffect.fandom.com/wiki/Collector_General?oldid=414491"
Community content is available under CC-BY-SA unless otherwise noted.