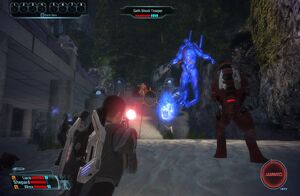 Mass Effect's open-ended combat occurs in real time. Most foot-based combat utilizes the third-person view, and the player has the ability to pause the action in order to give commands to the squad using the Power Wheel (360, PS3) or the HUD Screen (PC), similar to Star Wars: Knights of the Old Republic. Using the scope on a sniper rifle or the Mako turret changes the view to first-person.

Combat involves the player and allies using weapon upgrades, in combination with biotic and tech talents to defeat enemies.

Use the D-pad (X360, PS3) or the keyboard arrow keys (PC) to issue the following squad orders in the battlefield: 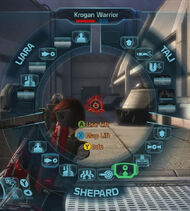 The Power Wheel is the in-game menu that allows the selection of different abilities or weapons for each party member in combat. The center of the power wheel is used as a crosshair for targeting with the menus around the ring.

To access the party's weapons, press and hold LB (L1 on PS3). Use the left thumbstick to browse each member's weapons, and press A (cross) to equip. Tap LB (L1) to switch quickly between your current weapon and the last weapon used.

To access the party's talents, press and hold RB (R1). Use the left thumbstick to browse each member's abilities, and press A (cross) to queue an ability up as an action, which will be used when you release RB (R1). You can also press X (square) to map the ability, but note that there is no way to unmap it. Tap RB (R1) whenever you want to quickly activate it in combat. Weapon abilities are interchangeable -- for example, if Marksman is mapped and you are carrying a shotgun with Carnage unlocked, tapping RB (R1) will activate Carnage. 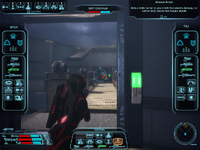 The PC version uses a HUD screen instead of the Power Wheel. The screen is split into three sections:

When a character's health is reduced to zero that character is killed. At the end of combat, squad members will automatically revive, but if Commander Shepard's health is depleted, you must reload an earlier save. Health can be restored either by natural regeneration (though this happens very slowly for non-Soldiers) or with medi-gel. If a character is killed they can be revived with Unity, with medi-gel if the Medic specialization is chosen, by entering the Mako, or by entering or exiting a building.

A character's health is usually protected by their shields; they will only start taking health damage once these are destroyed. However melee attacks or environmental damage ignore shields completely and may cause toxic damage. Toxic attacks not only directly damage health, but they leave the character more vulnerable by reducing that character's defenses. This is signified by the character's health bar changing from red to green.

All characters gain a small amount of extra health when they level up, but the Fitness talent significantly adds to the health bar. Adding a Medical Exoskeleton or Medical Interface to armor will improve health regeneration and toxin resistance.

Low-rising cover causes characters to crouch and usually provides the greatest field of view, allowing more of the battlefield to be targeted. High-rising cover allows characters to remain standing, but restricts the field of view to either left or right of the cover object at any one time; in some cases, characters can alternate between left and right stances, but this makes the opposite side a potential blind spot. Characters can also stand behind objects or environmental features to protect themselves from enemy fire without "adhering" to those objects for cover. This often restricts the field of view to an even greater degree, but characters retain complete freedom of movement.

A squad is the group of team members which the player can select to accompany Commander Shepard on field missions, or while visiting one of the main civilized centers such as a space station or planet. A squad is typically made of three members: Shepard and two squadmates. When selecting a squad, Shepard can review for selected team members how squad points have been distributed among their different abilities.

Each squadmate has varying strengths in three fields: tech, combat, and biotic. These attributes can be seen as color bars in the squad selection screen to inform players of their squad's overall effectiveness in handling situations for each field.

On new profile, a player can choose amongst three difficulty settings:

After finishing a playthrough on any of the above difficulties, the Hardcore difficulty will be unlocked.

Hardcore is the penultimate difficulty setting. It will be unlocked by completing one playthrough on any difficulty.

While playing on Hardcore:

Once a playthrough on Hardcore is completed, the Insanity difficulty will be unlocked, provided the difficulty is not changed at any point (players can scale up or down the difficulty, until the end of the Eden Prime mission). Completing a Hardcore playthrough will also unlock the Distinguished Combat Medal (25 gamerpoints/silver trophy). As an additional reward you will also unlock a Saren gamer picture (not available for PC).

Insanity is the highest difficulty setting. To unlock Insanity, you must complete one playthrough on Hardcore without changing the difficulty during the game. On the PC, it can also be unlocked by modifying the game's configuration files (doing so will still allow the player to get the achievement). Playing on Insanity difficulty with a brand new (level 1) character is very tough as enemies can deal a lot of punishment.

While playing on Insanity:

Once you complete a playthrough on Insanity difficulty, you will unlock the Medal of Valor (50 gamerpoints/gold trophy). As an additional reward you will also unlock an "N7" gamer picture for use on your profile (not available for PC).

Target Assist Target assist is designed to make combat easier for players not accustomed to third-person shooters, or possibly players struggling with the game. Target assist does not improve the player's accuracy - in other words, it will not decrease the size of the crosshair. Instead, the game interprets shots close to enemies as shots at enemies.

Squad Power Usage This option governs how squad AI use their talents and abilities:

Heat builds up while firing a weapon due to increased friction that will eventually cause the weapon to overheat. When overheated, a weapon will not fire, requiring a cooldown period before it can be used again. This leaves the user vulnerable, so a good strategy for armed combat is to use short controlled bursts of fire to prevent excess heat build up. Alternatively, weapon upgrades such as a Heat Sink or Frictionless Materials increase heat absorption, allowing the player to fire more shots before their gun overheats. However, some upgrades such as Scram Rail or a High Caliber Barrel decrease heat absorption, making guns overheat faster. Other upgrades may indirectly affect heat build up by slowing down or speeding up rate of fire - it might be a good idea to pair up upgrades that speed up overheat with ones that slow down rate of fire (thus partially countering the effect, while gaining the - usually susbstantial - benefits of both).

Sniper rifles and shotguns tend to be the worst offenders for overheating, while assault rifles and pistols build up heat more slowly. Enemy weapons can also be deliberately overheated with Sabotage.

Since the in-game text of the High Explosive Ammo Upgrades states that it adds "+500% Heat Generation" it can be assumed that:

Weapons may vary greatly in the amount of heat they produce but they all share the same maximum level of heat and a dispersion rate that only varies between weapon levels. Heat is dispersed at a constant rate and if this rate is overcome while firing the weapon, then heat will build until either the player stops firing or the weapon overheats. In the event that a weapon overheats, the weapon will be unable to fire again until it has completely cooled down at a penalised rate of dispersion. The player can monitor the heat level of their current weapon from an indicator bar located on the left side of the HUD. The game stores a weapon's current heat level as a value ranging from 0.0 to 1.0. A Level 1 weapon will have a dispersion rate of 0.24 per second which increases in increments of 0.01 per weapon level until 0.33 at level 10. The overheat dispersion rate is 0.16 per second at Level 1 increasing at the same 0.01 per level until 0.25 per second is reached at level 10.

A full heat indicator bar (ignoring overheat penalty) would empty in 4.1667 seconds with a Level 1 weapon and 3.03 seconds for a Level 10 weapon.

Heat is the limiting factor in sustained fire, so selection of equipment and talents to strike a good balance between duration, accuracy and fire power is important. Though accentuating one of those attributes at the expense of others can yield interesting results, such as placing two Rail Extension VII's and High Explosive Rounds X on a sniper rifle, disregarding heat entirely to create a veritable one shot cannon with high splash damage.

Heat Generation can be influenced in any of five ways:

On some machines, it is possible to trigger the "Overheat bug" that locks a weapon in its overheat state until the game is reloaded, or your party returns to the Normandy. This bug is the result of the Dog of War and Geth Hunter achievements. The only solution here is to remove those achievements from the profile.

Note: A possible fix for this issue is deleting the profile file in the save folder (Documents\BioWare\Mass Effect\Save\Profile.MassEffectProfile) and then reloading the save from every profile to rebuild the file and restore achievements. (See: Instructions to "Fix" the Overheat Bug Below)

You can also use the unofficial Critical Mass editor to remove the Geth Hunter achievement.

Instructions to "Fix" the Overheat Bug: This Thread has a method by which to fix the Mass Effect Overheat Bug without "losing" achievements. This should be done prior to obtaining the Level 50 or 60 Achievements as, according to the thread, resetting the L50/L60 achievements does not unlock the ability to take a character to L60. (Note: This fix requires use of the console to re-apply your achievements.)

Retrieved from "https://masseffect.fandom.com/wiki/Combat?oldid=523643"
Community content is available under CC-BY-SA unless otherwise noted.