View source
watch 01:58
Who is Commander Shepard?
Do you like this video?
Play Sound

“You're not even alive. Not really. You're just a machine. And machines can be broken!”

Commander Shepard is the main protagonist of Mass Effect, Mass Effect 2, and Mass Effect 3, whose gender, appearance, skills and pre-service history are all customizable and have impacts on the story. Shepard's first name is also customizable, but is never stated in-game. The pre-made Shepard for the quickstart option is a male Soldier named John, with the Earthborn/Sole Survivor profile.

Shepard was born on April 11, 2154,[1] is a graduate of the Systems Alliance N7 special forces program (service no. 5923-AC-2826), a veteran of the Skyllian Blitz, and is initially assigned to the SSV Normandy in 2183 as Executive Officer, with a Systems Alliance rank of Lieutenant Commander. Shepard later becomes the first human to join the Spectres, an elite special task force for the Citadel Council. 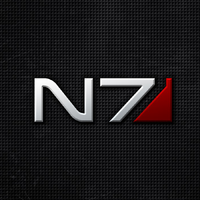 Profile Reconstruction is the character creation system of Mass Effect. The process starts with the player either selecting a preset character or creating a custom character.

When creating a custom character, the player can choose to play as a male or female Shepard. The names for the preset character models are either John Shepard for male, or Jane Shepard for the female, though only the first names may be customized and not the actual model.

The player then selects Shepard's pre-service history, by choosing Spacer, Earthborn, or Colonist. This choice affects how others talk about the main character and, in combination with the psychological profile, determines how many bonus Paragon and Renegade points the Commander has at the start of the game. Some assignments in the game are only available to those who selected a particular pre-service history.

Following a selection of pre-service history, the player must choose a psychological profile: Sole Survivor, War Hero, or Ruthless - each of which relates to a specific event in Alliance history and places Shepard in a prominent role.

The player must then accept a military specialization, each of which determines what set of abilities, or talents, the player will have access to in combat. The six classes are Soldier, Engineer, Adept, Infiltrator, Sentinel, and Vanguard. The class choice will also affect weapon proficiency – if Shepard is not proficient with a weapon, the Commander can still fire it, but cannot zoom in with it, and many weapon bonuses are void. This applies to all weapons except the pistol, which all classes are proficient in.

The player's choice of class does not affect the story in any way; there is one minor variation in dialogue when speaking to Kaidan Alenko, which refers to any chosen biotic class or biotic bonus talents in Mass Effect, as well as a line of dialogue based on class selection with Liara T'Soni in Mass Effect 3. A biotic class may also get an additional line when Samantha Traynor is talking about Grissom Academy, while the Engineer class will have an option to repair systems quickly during a situation on Omega.

If the player is creating a second character, at this point any unlocked bonus talents may be selected. These talents are unlocked by gaining the achievement for each talent. The player can choose one additional talent to add to their skill base. This talent is not reliant upon the existing class or prerequisite talents. For example, a pure Soldier can have a tech bonus talent, and an Engineer can be given Singularity.

In the event that the Soldier class is not chosen, a second weapon specialization, such as the Assault Rifle for the Adept, may be chosen instead of another ability.

The ultimate stage of customization, the player may alter their character's facial structure, head, eyes, jaw, mouth, nose, hair, scarring, make-up (female only) and beard (male only). Alternatively, the player may select the default appearance.

Before the game begins, a profile summary is shown for review, and a chance to return to previous stages of customization and make changes is available.

If Commander Shepard is not edited, and is accepted as stock, Shepard will be Earthborn, a Sole Survivor, and a Soldier. If Shepard is male, his name will be John Shepard; if female, her name will be Jane Shepard.

“Just once I'd like to ask someone for help and hear them say, ‘Sure. Let's go. Right now. No strings attached.’” 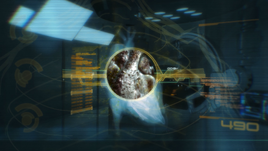 After the attack on the Citadel, the Alliance sent Shepard to root out any remaining geth resistance. The Normandy was sent into a sector where three ships were reported to have gone missing in the space of one month. After four days of fruitlessly searching for signs of geth activity, the Normandy is attacked by an unidentified ship, ripping it apart.

As the rest of the crew abandoned ship, Shepard went to rescue Joker, who refused the initial evacuation order believing he could still save the ship. Unfortunately, a blast separated them just as Shepard managed to get Joker into an escape pod. The Commander's hardsuit was damaged by explosions and Shepard was flung into space, barely surviving the Normandy's destruction. However, the suit's pressure seals were compromised, and it is apparent that the Commander suffocated to death, coupled with the possibility of the hardsuit burning up on reentry to the planet below.

Due to his comprehensive knowledge of galactic events, the Shadow Broker sends Feron, a drell in his service, to obtain Shepard's body. At the same time, Liara T'Soni, who has been looking for Shepard since the attack, is recruited by Cerberus to recover the Commander's body. Feron had originally planned to return the body to the Shadow Broker, until he hears of the Broker's deal with the Collectors. At that point, he defects to Cerberus. Once the Commander's body is retrieved by the duo, they decide to give it to the pro-human organisation Cerberus, rather than turning it over to the Collectors.

In an effort undertaken by Cerberus called the Lazarus Project, Shepard is rebuilt and revived, organically and synthetically. Two years later, Shepard awakens in the lab of a Cerberus space station, which is under attack. As Shepard moves through the station, the Commander begins to learn about Project Lazarus and the effort taken to bring Shepard back—with many data caches citing the immense expense of the project and that despite their efforts to make the Commander exactly as before, Shepard may have been inadvertently altered in some way. Shepard has also been referred to as "asleep" for some time by the Illusive Man, leader of Cerberus. 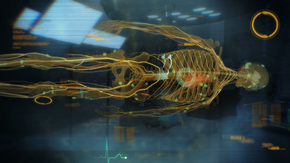 All the while, the entire populations of human colonies have been disappearing without a trace during the Commander's incapacitation. Due to the ignorance and political red tape hampering both the Alliance and the Council, Cerberus is the only organization in a position to combat the threat, and Shepard agrees to work with Cerberus to solve this mystery. Meanwhile, rumors of Shepard's apparent survival have mixed concerns. Some would even think that Shepard is undercover investigating the colony disappearances.

Because Shepard was awakened before the Commander's reconstruction was truly complete, Shepard's face bears several glowing scars, that can act as a visible indication of alignment. Earning Paragon points will cause these scars to slowly fade, while Renegade points make the scars more noticeable, showing more of the glowing orange cybernetics. Higher Renegade scores will also cause the eyes to degenerate, first leading to glowing sections within the iris; at the higher two sections of the Renegade scale, the eyes visibly glow red.

Immediately after gaining access to the Normandy's Tech Lab, Shepard receives an email from Doctor Chakwas which explains that positive thoughts will heal the scars. It also states that, through an upgrade to the Normandy's Medical Bay, a surgery could insulate the cybernetic implants and accelerate the healing process. If the player chooses to have the surgery, the scars are permanently healed and Shepard's moral choices will no longer affect the Commander's appearance. This upgrade costs 50,000 platinum; the upgrade itself does not heal the scars, but upgrades the medical bay, where Shepard can go to heal the scars at any time.

If Shepard chooses not to heal the facial scars during Mass Effect 2, they will still be healed at the beginning of Mass Effect 3. If Shepard continues along the Renegade path in Mass Effect 3, the scars and red pupils will eventually return.

“It's hard enough fighting a war. But it's worse knowing no matter how hard you try, you can't save them all.”

If Shepard took part in the events of Arrival, the Commander is on Earth and is placed under arrest, waiting to be tried for causing the destruction of the Bahak system and its 300,000 batarian colonists. If not, then Shepard is tried for working with Cerberus. Six months later, the Reapers launch an assault on Earth, having found an alternate means of entering the galaxy. Shepard and David Anderson escape to the Alliance-refitted Normandy SR-2, where Anderson recommissions and charges Shepard with finding help while he stays behind to lead the resistance.[2][3][4] 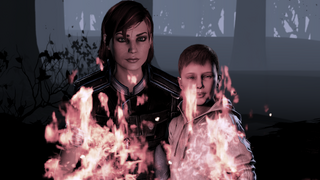 As the Normandy lifts off, Shepard spots a young boy who previously refused help, climb into a departing shuttle, only for it to be shot down by a Reaper Destroyer. Shepard continues to have recurring dreams of the child, seeing him becoming consumed by flames before the Commander can reach him. In one such dream, Shepard sees the boy run up to another version of themselves, before both of them are consumed by the fire.

Shepard then begins trying to recruit the different races of the galaxy, both to fight the Reapers, and build a super weapon known simply as the Crucible, the schematics for which were discovered by Dr. Liara T'Soni in the Prothean Archives on Mars. Unfortunately, the Illusive Man seeks to oppose the Commander's efforts while trying to find a way to control the Reapers.

During the final battle for Earth, Shepard is gravely wounded in an attack by Harbinger. After reaching the Citadel and dealing with the Illusive Man, Shepard is greeted by the Catalyst - an ancient A.I. that controls the Reapers. The Catalyst explains to Shepard the purpose of the Reapers and their cycle of destruction, and then states that Shepard has up to three options for ending the cycle:

Assuming Shepard chooses an option that activates the Crucible, then many years in the future, Commander Shepard has become a legendary figure known as "The Shepard".

If Shepard does not activate the Crucible, a future cycle learns of their actions through Glyph, and all that is known about "The Shepard" is what was stored in the archives left by Liara. This new cycle is implied to have solved the Reaper threat thanks to information passed down by "those who came before".

If Shepard chooses an option that activates the Crucible, the epilogue shows the squad along with Joker, Cortez (if he survived) and Traynor. The squadmate Shepard was closest to places Shepard's name above Anderson's on the memorial wall, and, if Shepard chose to merge organic and synthetic life, hugs EDI. If, however, Shepard chose to destroy the Reapers, and the player's Effective Military Strength was high enough, the squadmate hesitates to put Shepard's name on the wall and instead smiles hopefully.