For the construct on Earth, see Conduit (Mass Effect 3).

Commander Shepard first hears of the Conduit from audio files Tali retrieved from one of Saren Arterius' geth. After hearing how keenly Saren and Matriarch Benezia are hunting for it, believing it to be the key to bringing back an ancient machine race called the Reapers, Captain Anderson assumes the Conduit is some sort of weapon. Liara T'Soni, an expert on the Protheans, has only heard bits and pieces about the Conduit that suggest it is linked to the Prothean extinction.

The true nature of the Conduit remains a mystery until the damaged VI on Ilos, Vigil, fills in the gaps. The Conduit is a miniature mass relay which the Prothean researchers on Ilos built as a prototype during their experiments into mass relay technology. It is essentially a 'back door' onto the Citadel, which is the hub of the relay network. It has no connection to the rest of the network, making it independent.

The 'receiving' relay on the Citadel was mistaken for a piece of Prothean art, the Relay Monument, and was never removed by the Council. It was not completely innocuous – Garrus observes that the keepers never paid much attention to the statue, and Kaidan claims he can hear a low humming noise coming from the 'statue' which makes his teeth tingle – but otherwise the relay was seen as little more than a curiosity by the Citadel races. 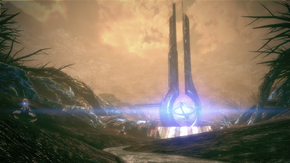 The surviving Prothean scientists, trying to break the cycle of genocide the Reapers perpetuate, used the Conduit to travel to the Citadel once the Reapers had departed. They altered the signal the keepers received from Sovereign that would open the Citadel relay into dark space. Since the Conduit's relay corridor only links in one direction, the researchers were then trapped on the station – presumably, as Vigil suggests, left to slowly starve to death.

Following Saren back to the Citadel, Shepard's team drives the Mako straight into the Conduit mere seconds before it shuts down, dodging the Geth Colossi left on guard. They successfully reach their destination and launch their counter-attack.

Technically, the Conduit is not simply the miniature prototype relay found on Ilos, but also the Relay Monument itself. The Conduit and the Monument form both ends of a relay system, one relay to send and one to receive. Apparently, living matter would not survive a trip through the Conduit on foot, at the very least requiring an enclosed space such as a vehicle to arrive at the destination safely.

As of 2185, the public has become aware of some of the details of the Conduit, as a Presidium Groundskeeper recommends that Shepard look at some demael flowers across from the Conduit on the Presidium.