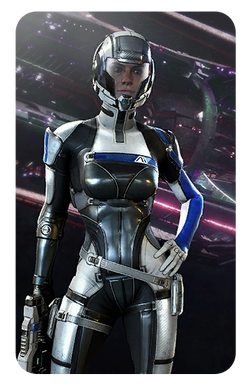 Cora has asked you to accompany her to a site on Eos.

Automatically obtained when Pathfinder Ryder approaches the Email Terminal on the Tempest after the rescue of ark Paarchero.

Acknowledge the email to proceed.

Speak to Cora on the Tempest Edit

Cora Harper requests a favor from you.

Go to Eos with Cora Edit

located in Fairwinds Basin (northeast of the Forward Station in the middle of the lake) and talk to Cora.

Cora has brought a soil converter. Eventually the converter will turn sand into something useful, and then with some rain and seeds, it will be a garden. Not for a long, long time, perhaps, but like the asari, Cora has learned to think in the long term. Ryder and Cora then seed the garden.

If you flirted with Cora before and hasn't already locked in a romance, it is possible in this mission to take the opportunity (with a kiss interrupt) or to reject her.

Depending upon your romance choice during the mission, one of two emails will show up:

Retrieved from "https://masseffect.fandom.com/wiki/Cora_Harper:_A_Foundation?oldid=515501"
Community content is available under CC-BY-SA unless otherwise noted.