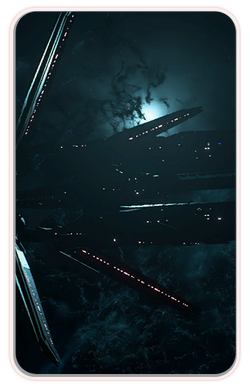 The asari ark, the Leusinia, is still missing. Given Cora's history with asari commandos, she has spearheaded the effort to find the Leusinia and bring it home to the Nexus.

This loyalty mission is automatically acquired after the previous one.

Reading and acknowledge the email was required to complete the previous mission Cora Harper: Asari Ark, therefore this objective should complete automatically. Reading the email can be skipped by talking to Cora first, which will mark this goal as failed but have no other effect.

Speak to Cora on the Tempest Edit

Speak to Cora to find out that she has tracked down the ark and has a navpoint that might be close to the ark's location. The Valay system now becomes available on the Galaxy Map. 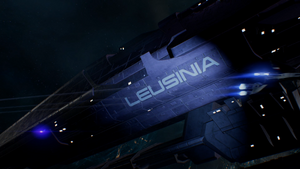 Upon entering the Valay system, Suvi detects an anomaly on sensors. Scanning the anomaly reveals that Ark Leusinia is here, heavily damaged and nearly without power. Boarding the Leusinia begins the mission. Note: During loyalty missions, manual saving is disabled for the duration of the mission.

Automatically completes when the squad starts on the ark.

The squad enters the Leusinia through a darkened corridor with signs of recent combat. As the squad approaches the second door, Captain Elonis Atandra is heard over comms, preparing to vent the corridor to space.

After convincing Atandra that the squad is not more invading kett, the squad is invited to the bridge. Datapads in the next area reveal details of the near-catastrophic damage to the Leusinia, and that the asari pathfinder Sarissa Theris, not Matriarch Ishara overrode her SAM's recommendation, ordering the revival of the family members of the few surviving flight crew before reviving more critical personnel.

Upon reaching the bridge, Ryder finds Sarissa and Captain Atandra. Captain Atandra reveals that Matriarch Ishara died attempting to negotiate with the kett, and Sarissa being next in line for succession assumed the position of Pathfinder. Ishara's death is said to have provoked Sarissa into stealing the kett navigational charts of the Scourge. In turn, the Archon has sent his top agent, The Valiant, and his Decimation hunters in pursuit of the Leusinia, and Sarissa in particular. Kett have boarded the Leusinia and are still trapped below decks.

The Leusinia's drive core is without power, so the ark can't escape from the kett pursuers via FTL. Sarissa has her commandos attempting to repower the core, but this requires fighting the kett boarders. Ryder goes to assist them while Sarissa continues working to decipher the kett nav chart so the Leusinia can escape through the Scourge.

Activate the Tram Control to ride the tram.

Following a short tram ride, Ryder emerges in a corridor leading to Hangar Control. There is a datapad on the floor.

Sarissa's new second-in-command Vederia Damali is down the hallway. Vederia has discovered that the kett have blocked open the hangar doors and the safeties are draining too much power trying to close the doors again for the drive core to recharge.

Ryder must now use SAM on a nearby console to override the hangar door controls and stop the power drain.

Interacting with the console triggers a kett attack from the catwalks above, with Ryder must stay confined to the white circle near the console until the override is completed. Fortunately, there is convenient cover.

After the override is finished, defeat all remaining kett to proceed.

After combat is over some power junctions to the west explode, and Vederia runs off to investigate a maintenance panel there. Follow and talk to her. Vederia discovers that something unknown in the lower decks is also draining massive amounts of power, which caused the overload and a fire below. Vederia heads off to check on the remaining stasis pods while Ryder cuts through the Leusinia's living quarters to reach the second power drain.

Go below decks through the living quarters Edit

You will occasionally hear from Vederia travelling through the next few areas. She's having her own problems and receives advice from Cora.

At the bottom of the darkened staircase is a small area with a datapad and a container. Ryder will also discover animal storage crates, which the kett apparently used to bring Wraiths aboard.

Proceed through a darkened corridor. Ryder can scan a Broken Door for +10

The first door on the right contains a container and a small shrine to the Matriarch.

The first door on the left in the hallway contains a room with a terminal with two entries, a data pad, a container, two Personal Lockers (#10034 and #43556) that can be scanned for +10

The third room down the hall with a doorway on the right contains a room with a terminal with two entries, a container, two Personal Lockers (#11093 and #95884) and a Weapon Rack that can be scanned for +10

A few Wraith will ambush Ryder after the first three rooms.

and there is a large orange container for loot.

Backtracking to the fourth room, and the path forward, leads to a corridor with some Maintenance Pipes that can be scanned for +10

Descending further down the staircase and over obstacles. Note: Take care not to make contact with the fire patches on the ground. This fire hazard will quickly deplete life support and kill Ryder.

Kett are here, specifically Chosen, Wraiths, and one Destined. Defeat them.

After the battle, scan and then use the console to attempt to activate the fire suppression system. The console promptly shorts out. Scanning the Fire Suppression System awards +10

. It reveals a nearby access panel where power has been diverted someplace else. Interact with the panel to repair the system.

Use the console again. This activates the fire suppression system and Ryder may proceed.

At this point, Vederia calls Ryder and says that she's discovered the source of the second power drain. She gives Ryder the navpoint

and heads off to meet the squad there.

Proceed through a door which was previously blocked by the fire. There is an Armor Maintenance Station that can be scanned for +10

At the bottom of the stairs, if Ryder continues past the stairs leading to the navpoint, Ryder will find engineer Lapiris T'Caal lab. There is a terminal here with two entries and a datapad that offer some insight into the mysterious power drain ahead. Scanning the Workshop Equipment awards +10

. There is also a large container with loot.

Proceed to the Observation Deck and speak with Vederia.

Vederia is here, with a device which proves to be a mass effect generator used to hold a large section of damaged hull plating in place, which kept enough air pressure for a hundred asari to escape. Now the power drain is keeping the Leusinia from going to FTL. Vederia can't shut the device down, and needs Ryder's and SAM's assistance.

Eliminate the kett on the observation deck Edit

As you disconnect each cable, a wave of kett -- one Destined, one Anointed, and several Chosen and Wraiths -- drops in to attack. Dispatch the wave and proceed to the next cable. Kett will shoot at Vederia, but her biotic barrier seems to be invincible.

Note: The eliminate objective appears each time after a power cable is disconnected.

Once the final wave is defeated (+580 XP), return to the device, and deactivate it.

Disabling the device releases the section of hull plating and restores enough power to charge the FTL drive. As Vederia runs off to assist, SAM locates Matriarch Ishara's succession log, which is now accessible thanks to the restored power. The audio log reveals that Ishara died because Sarissa chose to go after the kett navigational charts rather than to rescue her Pathfinder. Cora is distraught; Ryder can either agree with Sarissa's decision or call it a screw up.

The kett interrupt the conversation by sending a dropship to the hull breach on deck twelve. Sarissa comes down from the bridge to assist, while Ryder and squadmates put on their helmets and head for the breach.

Get to Deck Twelve Edit

As Ryder proceeds to the breach, SAM informs Ryder that the mass effect field device can still be used to disrupt local gravity.

) can be used to trigger the mass effect device. Triggering it will blow most of the kett in a wave into space (though not the Valiant), while Ryder and the squad are secured by their mag boots. The device will only work once, so saving this for the third wave will provide Ryder the ability to concentrate on the Valiant.

Note: Enemies can be tossed out of the hull breach by Throw and similar powers.

Defeating the Valiant triggers a cutscene where the wounded Valiant orders the kett ship to forget about capturing the Ark and destroy the Ark instead. At this point Sarissa finally arrives and finishes him off. The Valiant's ship now launches a barrage of missiles at the Leusinia, but Sarissa, assisted by Cora, forms a large Barrier which deflects most of the missiles and reflects others back at the Valiant's ship, which explodes as the Leusinia escapes into FTL.

Note: When then Valiant is defeated, a cutscene starts immediately. Ryder receives +1330XP (offscreen) but loses the chance to loot any slain kett. Players who care about such things should make sure to sweep Deck 12 before landing a final blow.

Ryder, Cora, and Sarissa return to the bridge and meet up with Captain Atandra and Vederia. Ryder and Cora confront Sarissa about Matriarch Ishara's death. Sarissa wants her actions covered up, saying that a Pathfinder needs to give the people hope. Ryder can either go along with the cover up or demand that the truth be told.

If you don't go along with the cover up, Captain Atandra is furious with Sarissa and wants to transfer Pathfinder status to the next in line, who is Vederia. Ryder can either agree to this or advise that Sarissa be kept as Pathfinder.

If you both expose Sarissa's action and goes along with Atandra, Vederia replaces Sarissa as the asari pathfinder. Otherwise, Sarissa keeps the job. While Cora is not happy with a cover up, there don't seem to be any serious repercussions for her relationship with Ryder, whatever is chosen.

Ark Leusinia will now be docked at the Nexus. Next time Ryder visits the Nexus the asari are welcomed by Tann, and they also give their thanks to Ryder for saving them.

If Ryder chooses to keep Sarissa’s actions a secret or allow her to stay on as Pathfinder, she shows up in the game's final battle. If Ryder replaces Sarissa with Vederia, Vederia shows up instead.

Retrieved from "https://masseffect.fandom.com/wiki/Cora_Harper:_At_Duty%27s_Edge?oldid=516949"
Community content is available under CC-BY-SA unless otherwise noted.