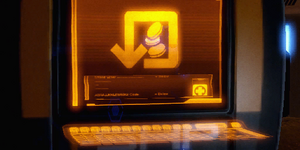 Credits are the standard galactic currency, and are used to purchase weapons, armor, armory licenses, and upgrades.

The credit was established as the standard galactic trade currency by the Citadel's Unified Banking Act, a piece of legislation enacted by the Citadel Council. This legislation was drafted by the volus, due to their expertise in financial and commercial matters. The Act also laid out regulatory guidelines for determining the value and exchange rate of the credit in relation to the currencies of the individual Citadel member races.

The credit has a managed floating exchange rate, calculated in real time by the central bank to maintain the average value of all participating currencies. Some regional currencies are worth more than a credit, and some less. When the Systems Alliance joined the Citadel, its various national treasuries were linked into the credit network. A human with a bank account of Mexican pesos, Japanese yen, or Indian rupees can purchase any item priced in credits at fair market value. All economies that participate in the credit network are required to price items in both local currency and credits.

Hard currency can be stolen or counterfeited, so electronic fund transfers are the norm. More importantly, physical transactions cannot be easily tracked, making them ideal for tax evasion or the purchase of illegal goods.

In Mass Effect, Commander Shepard is limited to a maximum of 9,999,999 credits. After this cap is reached, no monetary rewards for completed missions/assignments will be given. Any items sold to merchants will also effectively be given away for free. Upon reaching this limit, it is advisable to convert any unwanted items to omni-gel rather than to sell them; alternatively, the player may keep them around to sell later after buying something.

Mass Effect 2 has the same credits cap as the first game, although reaching this limit requires cheats / exploitation. Credits are fairly sparse in Mass Effect 2. They are rewarded by examining certain datapads and containers and after completing missions. With all downloadable content installed and completed, coupled with level 60 import bonuses and the bonuses from previously completing a Mass Effect 2 playthrough, it is possible to purchase everything in the game including the cabin accessories such as model ships and fish.

In Mass Effect 3, credits are obtained in much the same way as in Mass Effect 2. Credits can be spent to purchase weapons, weapon upgrades, weapon mods, armor sets and parts, power resets for party members and Shepard in the Normandy's Med-Bay, bonus powers, and other miscellaneous items. With the release of the Mass Effect 3: Citadel DLC, it became possible to earn unlimited credits in a single playthrough by either using the casino, or redeeming tokens from repeated Armax Arsenal Arena runs.

Credits in Mass Effect: Infiltrator is a special currency with a Cerberus logo which is used by its operators. They can be obtained by Randall Ezno in three different ways:

Those credits can only be spent on the Mass Effect: Infiltrator Store to acquire or upgrade abilities and equipment for Randall Ezno.

Note: It is also possible to buy credit packs with real money from the Store via a micro-transaction system.

Credits in Mass Effect: Andromeda work much in the same fashion as prior Mass Effect games as it is a universal currency throughout the Heleus Cluster, even to the angara. Credits are found during combat, exploration, missions, and through merchant functions.

Credits can be spent on weapons, armor, Mods, Augmentations, ND1 Nomad upgrades, blueprints, Resources, and other items during gameplay.

APEX Strike Teams also uses Credits that are earned during missions. Apex & Strike Teams Credits are stored on a different account than Single Player and can only be used in the Store to buy boxes of equipment for Multiplayer Characters.

, gained via Strike Teams during APEX Missions, and Andromeda Points

earned via a micro-transaction system.

Retrieved from "https://masseffect.fandom.com/wiki/Credits?oldid=510899"
Community content is available under CC-BY-SA unless otherwise noted.