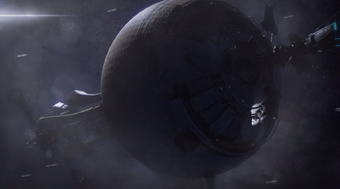 The Crucible is an ancient and highly complex device constructed by the Protheans as a superweapon to stop the Reapers, but never successfully implemented before their extinction. Its designs were stored in a Prothean archive on Mars and were later rediscovered by a Systems Alliance archaeological team. During the Reaper invasion of 2186, the designs are recovered by Commander Shepard on Admiral Steven Hackett's orders after the fall of Earth. The Crucible becomes the galaxy's last hope. 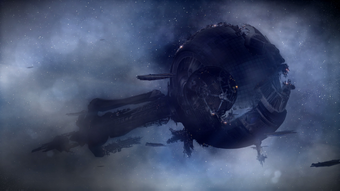 It is unknown who initially began the development of the Crucible. Countless different species obtained and made contributions to the design over the course of millions of years, but none successfully deployed it before being wiped out by the Reapers. The Reapers were led to believe all traces of the design were eradicated but throughout the countless cycles, the Crucible design was continuously preserved.

The latest species to try, the Protheans, were able to construct the Crucible, but before they could deploy it, infighting broke out between those who wanted to use it to destroy the Reapers and a faction that believed they could use it to control the Reapers; these separatists were later discovered to be indoctrinated.

While the Protheans never had the chance to activate the Crucible, its schematics survived in a Prothean archive on Mars for the next 50,000 years.

After recovering encryption keys from a Prothean Shrine on Kahje, Liara T'Soni traveled to the Mars Archive to see what she could uncover. While examining the archives in 2186, she found the Crucible's schematics and recognized their significance as a potential means to defeat the Reapers.

Commander Shepard retrieves Liara from Mars and hands over the schematics to the Alliance, which immediately begins construction, a massive undertaking drawing on resources throughout the galaxy. Staggering financial costs are disregarded in the common effort to create something, anything, that could stop the Reapers. 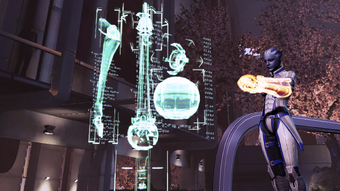 Despite the Crucible's elegant design, modern scientists could only determine that the device exploited the technology of mass relays, and were left to speculate on how it would ultimately function. More importantly, before the device could be activated it required one final component: the Catalyst.

As revealed by the Prothean VI Vendetta, the Catalyst is the Citadel, the central control hub of the entire mass relay network. At some point in the past, contributors to the Crucible's design realized that it required a means to massively amplify its energy in order to be effective. The Citadel possesses this capability, and so was incorporated into the schematics.

Before the galaxy could combine the Crucible with the Catalyst, however, the Illusive Man flees to the Citadel and alerts the Reapers to the plan. The Reapers seize control of the Citadel and move it to the heart of their occupied territory, in orbit around Earth. With no other option, Admiral Hackett marshals the galaxy's fleets and sends them to Sol. The Crucible enters the fray with a token defense force after the initial offensive.

While the galaxy's forces wage the final battle against the Reapers, Commander Shepard succeeds in infiltrating the Citadel and opening it for docking with the Crucible. In doing so Shepard encounters the Catalyst itself, an entity that resides within the Citadel and manifests as a young human boy whose death Shepard witnessed during the initial escape from Earth.

The Catalyst describes the Crucible as little more than a crude but effective/adaptive power source. In combination with the Citadel and the mass relays, however, it can release tremendous amounts of energy throughout the galaxy. In bringing the Crucible to the Citadel, the Catalyst had come to the conclusion that the cycle of extinction is ineffective to resolving organic-synthetic conflicts and leaves it up to Shepard to choose a new solution that the Crucible's power now renders possible. 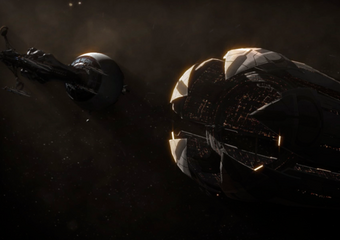 The Catalyst explains that Shepard has three ways to use the Crucible: to destroy the Reapers and all synthetics; to control Reapers, allowing the Commander's consciousness to replace the Catalyst though at the expense of physical form; or to merge with the Crucible's energy to create a new organic-synthetic "DNA" for all denizens of the galaxy, allowing organics to gain perfection through technology and synthetics understanding of organics. Alternatively, Shepard can refuse to make a choice, preventing the Crucible from firing at all and allowing the Reaper cycle to continue.

If Shepard chooses to destroy the Reapers, the Crucible fires a red beam of energy that destroys the Reapers on and around Earth and transmits to the mass relay network through the Charon Relay before severely damaging the relays and the Citadel as well.

If Shepard chooses to control the Reapers, the Crucible releases a blue wave of energy that brings the Reapers under Shepard's control and also transmits to the mass relay network, damaging the relays but leaving the Citadel intact.

If Shepard chooses to merge organic and synthetic life, the Crucible fires a green beam of energy that causes the Reapers to stop attacking, gives organics, synthetics and Reapers glowing eyes and circuit pathways across the body, but also damages the Citadel and mass relay network.