The Dark Star Lounge is a location on the Citadel. The lounge is located on the 28th level of a building in Zakera Ward's Mid-Wards District.

Attractions at the Dark Star Lounge include dancing, a wide variety of drinks, and gambling. An advertisement for this lounge can be heard on the 27th level. Its turian bartender has been serving drinks there for eight years.

In this lounge, Commander Shepard can speak to the Presidium Groundskeeper while investigating whether there are fish in the Presidium lakes. At the bar, the Commander can order a series of drinks, starting with an unnamed hard liquor toxic to dextro- species, then upgrading to batarian ale, and finishing with ryncol. Once they have all been drunk Shepard will pass out and come round in the lounge's restroom. Shepard can also dance with some of the lounge's other patrons. 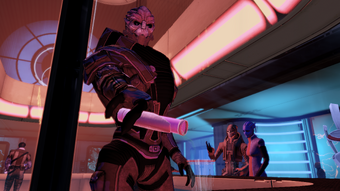 Retrieved from "https://masseffect.fandom.com/wiki/Dark_Star_Lounge?oldid=527305"
Community content is available under CC-BY-SA unless otherwise noted.