Mass Effect: Andromeda
Darla vas Hyperion is one of a trio of specialists awakened during the second wave of cryostasis revivals aboard Hyperion.

Darla's childhood was spent among the quarians as her parents were ambassadors to the Migrant Fleet. They lived in the same sterile conditions as their hosts, including wandering around in enviro-suits. She never went planetside for 10 years.

She became an ambassador like her parents did, fluent in 13 languages. After losing a relationship with a girl, Darla decided to go to Andromeda. Due to her spaceborne upbringing, she wasn't uncomfortable with spending 600 years aboard the ark.

Several weeks after Hyperion's crash-landing on Meridian, Pathfinder Ryder can talk to Darla and in the process learn about her and her colleagues Hunter Kerry, who works in Reconstruction, and Iora Pillay, Chief of Operations. Darla's job in Port Meridian is to ensure people properly match their jobs.

If Ryder professes ignorance about the term "second wave", Darla explains the first wave is comprised of "food and fences" personnel while people like the three of them are more suited for organizational tasks: more specialists, less generalists.

Darla was named according to quarian rules. She doesn't want a "vas Meridian" rename despite Hyperion's decommissioning when asked by Hunter. She wants to honor the ship that brought them to Andromeda as her godparents would want.

On subsequent visits to Meridian, Darla can be found near Liam Kosta preoccupied with deploying Hyperion's main cryobays but otherwise willing to spare the Pathfinder some time. Due to the demands of her job, she hasn't learned much about the world outside. She's grateful, though, that Hyperion still has a place in humanity's future. If Ryder asks what Meridian wants from them, she declares it's the same as it always have been: resources. 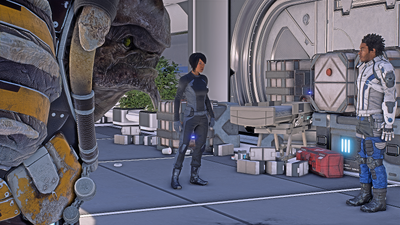 Regardless of whether Ryder finds planetside or spaceborne living more agreeable, Darla thanks them for Meridian. For her it's a blend of natural and technological, much like her experience aboard the Migrant Fleet.

Darla wants Liam to prep unfrozen colonists about life in Heleus. Placements are up by an appreciable amount, which the Placements Officer credits to the Pathfinder team's actions. Darla respects the difficulty of their job, a sentiment reflected in the placement numbers.

The nearby Nakmor Drack is surprised at Darla's name. For her part, she sees nothing unusual about it. Based on the krogan's reputation she'd give him a demolition specialist job if he only came out of cryo recently, eliciting a chuckle of appreciation from Drack.

Retrieved from "https://masseffect.fandom.com/wiki/Darla_vas_Hyperion?oldid=515789"
Community content is available under CC-BY-SA unless otherwise noted.