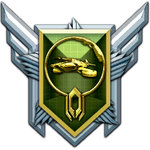 Data Hound is an achievement in Mass Effect 2 available with the downloadable content pack Overlord. Data Hound is obtained while piloting the M-44 Hammerhead on the surface of Aite after completing the assignment Overlord. It must be completed prior to starting Overlord: Atlas Station, however, as after that assignment Commander Shepard will no longer have access to the surface of Aite.

To obtain the achievement, the player must collect all six Cerberus data packets that have been scattered across Aite. The data packets can be picked up in any order, and do not have to be picked up at the same time, as long as all of them are collected before Atlas Station. This walkthrough presents the directions from Hermes Station, immediately after completing Overlord.

After exiting Hermes Station, go down the ramp, then make a sharp right and follow the wall on the right. You will have to make another sharp right into a very large cavern, but you should be able to see the sky through the far side of the tunnel. Just on the other side of the cave you will see a platform which is defended by two Cerberus Turrets. Take them out, and you will find the data packet, which resembles three red barrels sitting in a yellow ring. Hover over it and use the M-44's mineral retrieval system to pick up the packet.

Head back into the large cavern, but bear to the right at the fork. Head directly for the waterfall in front of you, and pass through it to the ramp just beyond. This leads to the entrance to Atlas Station, but there also happens to be an unguarded data packet here. Pick it up, and head back out the way you came.

As you reach the back side of the waterfall, turn right and follow the wall to another lake and waterfall, but this time continue past it to the ramp in front of you. This one is guarded by two Cerberus Turrets, however, so take them out before collecting the data packet, which is on the rear platform next to a large rover.

Exit this area and once again follow the right-hand wall around until it opens up and you see a path heading upwards that hugs the cliff on the left side. Continue to follow that path upwards and around the corner, and you will find a smaller platform guarded by two more Cerberus Turrets. Destroy them, grab the packet and get back on the path you were following.

Once again hugging the wall you came along before, you'll follow the path for a bit until it opens up into a wide area, and you see a natural stone bridge to your right. Packet number five is actually underneath that bridge guarded by two YMIR Mechs. The data packet here appears to have been dropped by accident, as the barrels are slightly scattered next to the smoking wreck of a car. Pick them up after taking care of the mechs, then head back towards the beginning of the bridge.

Once you are on top of the bridge, you can continue across it, heading for Vulcan Station, but you'll see an unguarded platform with the data packet sitting out in the open. Pick this final packet up and the achievement will unlock.

Retrieved from "https://masseffect.fandom.com/wiki/Data_Hound_Achievement_Guide?oldid=482135"
Community content is available under CC-BY-SA unless otherwise noted.