David Archer is the brother of Cerberus chief scientist Dr. Gavin Archer. David was born an autistic mathematical savant with unusually strong abilities including rapid calculation and eidetic memory. Like many autistic people, he is very sensitive to loud noise.

Present on Aite during Cerberus' Project Overlord, it was discovered that David was able to communicate with the geth on a fundamental level by reproducing their patterns of speech. As part of attempts to exploit the geth's religious tendencies, Cerberus had created a VI to serve as an "overlord" and give the organization complete control over all geth. Desperate to avoid the project's failure, Gavin Archer forcibly incorporated David into the VI program, exploiting his savant ability. After this point, David's mind couldn't handle the merger, causing the hybrid VI to go berserk and begin rampaging across Aite in an attempt to escape the planet and leaving David himself in extreme overload.

As a hybrid human/VI David can interface with and control any kind of machinery, including security mechs and geth. He is also capable of interfacing with cyborgs, at least to a certain degree, as he imprints memories and visual data directly onto Commander Shepard in order to show the Commander the events leading up to his forced merging with the VI platform.

Commander Shepard's deactivation of the rogue VI program frees David from its effects.

If Shepard stops the experiments, David is subsequently removed from the care of Cerberus and his brother and taken to Grissom Academy, an Alliance educational institution for gifted children.

If the Commander is willing to sacrifice David for science, David is given medical treatment, stays in his brother's care, and Project Overlord continues. 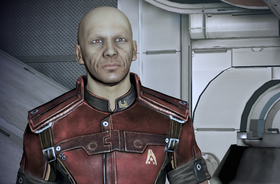 If Shepard delivered David to the care of Grissom Academy, he can be encountered there in 2186 during the Cerberus attack on the school. He assists his fellow students, Octavia and Isaac, in maintaining a kinetic barrier generator keeping Cerberus troops from getting at them. He vouches for the Commander's trustworthiness to his fellow students, and also gives the Commander access to a room containing a M-96 Mattock or M-22 Eviscerator in it. After escaping Grissom Academy, David goes with Kahlee Sanders to assist in building the Crucible.

If EDI is present, David recognizes her as the "Normandy Computer", and apologizes for attempting to hack into the Normandy's systems. If Garrus is present, he identifies him as "Normandy Crew" and also apologizes.

If David was left in the care of Cerberus, his brother explains that they were able to calm David down and were able to get some useful data on controlling the geth, but eventually David stopped responding to stimuli. Dr. Archer euthanised his brother as an act of mercy.

Retrieved from "https://masseffect.fandom.com/wiki/David_Archer?oldid=530447"
Community content is available under CC-BY-SA unless otherwise noted.